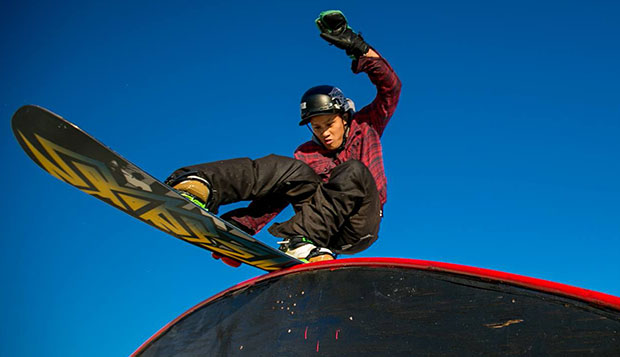 Kevin Manguiob, one of three to be inducted in the third Club Sports Hall of Fame class on Friday, practices tricks off a rail feature at the Liberty Mountain Snowflex Centre, where he picked up freestyle snowboarding. (Photo by Wesley Tate)

Since joining Liberty University's ski & snowboard team soon after the Liberty Mountain Snowflex Centre opened before his sophomore year in 2009, Kevin Manguiob has remained on the cutting edge of the sport, as well as his chosen profession of photography.

"It's been an awesome ride," said Manguiob, one of three members of the Club Sports Hall of Fame's third class who will be inducted during a ceremony Friday at 6 p.m. in the Hancock Welcome Center.

"It's been awesome seeing the talent that's been coming into Liberty and the level of competition that we're at right now," he said. "Over the years as everyone has pushed each other, everyone's level of riding has skyrocketed. It's been a blessing and I'm excited to see it continue to grow." 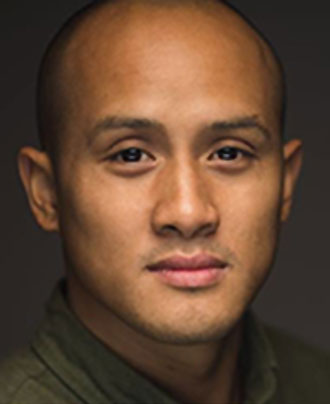 Manguiob, who served as team captain before graduating in 2011, stepped down this summer after five seasons as assistant coach as he and his wife, Valerie, await the arrival of their first child this month.

Born and raised on Staten Island, N.Y., Manguiob learned how to ski at the age of 8 with his father. They would get up early almost every weekend in the winter and drive a few hours upstate to ski all day.

After picking up snowboarding on a church youth group trip while in middle school, he trained through his high school years on double black diamond trails at big mountain slopes in New York and Pennsylvania before launching his freestyle riding career after arriving at Liberty.

Manguiob and a few Flames teammates, including Myles Stark, stayed in Lynchburg over the summer of 2010, when he developed many of the tricks they would use to lead Liberty's snowboard team to multiple podium finishes in slopestyle, big air, and rail jam events at the United States Collegiate Ski & Snowboard Association (USCSA) National Championships.

"(Stark, who's now in the Air Force) really pushed me to push the envelope of getting out of my comfort zone of snowboarding," Manguiob said. "We worked at Snowflex and then we would just snowboard all night and we all had a blast. Everyone has their own style, everyone rides different, and everyone really influences each other. We'd see someone do a trick a certain way and we try to do it the same way. From that one summer, I was able to go from barely getting 360-(degree jumps) around to stomping 720s and getting 900s around and going for 1080s."

That was also the summer Manguiob — who majored in business finance and planned to follow his father's path to working on Wall Street — discovered his passion for photography, after dabbling in it with a camcorder on a Students International mission trip to Guatemala while he was still in high school.

"During those years of snowboarding is really when I think I tried to tap into my creative side more in photography," Manguiob said. "Every time I'd go snowboarding, I always had my camera with me. We would just take pictures and ride. That was pretty much what we did every night."

His dad, who bought him his first snowboard in middle school, gave him his first digital camera over Christmas of his sophomore year at Liberty.

"Since then, I was one of those kids with a camera around my neck all day, every day," Manguiob said.

Now a senior photographer in Liberty's Marketing Department, Manguiob credits Les Schofer, who served on the photography staff for nearly 40 years, for sharpening his photo skills.

He said current Flames Head Coach and Snowflex General Manager Ryan Leeds, who will introduce him at Friday's banquet, was most influential in accelerating his development as a freestyle snowboarder and guiding him in his spiritual walk.

"Ryan has been my best friend for a long time," Manguiob said. "God blessed me with his relationship when I was kind of veering off spiritually. He's been such an encouragement to me, always pushing me toward Christ, first. Secondly, when you go out there, there's no other guy that rides like Ryan. The talent that he has is insane and he has fun doing it. I definitely look to him a lot for not just for inspiration, but for my riding style, too. He influences a lot of people up on that mountain."

Manguiob and Leeds see Liberty's ski & snowboard team as a ministry with relational evangelism as its primary goal. He said ski resorts outside of Snowflex are challenging mission fields.

"The snowboarding industry is a very rebellious culture, but there's a lot of freedom in it," Manguiob said. "When you have a school like Liberty, a Christian university, coming in and competing, there's a lot of judgement that goes around with how they perceive us and how they perceive Christianity. This is our opportunity to love on these people, to just serve them and build these relationships with them through the season.

"Ryan and I would always emphasize to the team that snowboarding's not just about going down a mountain on a piece of plastic and wood," he added. "We always tried to remind them that our No. 1 goal and mission in this world is to be a light to these people, to be a light on the hill, as we like to say." 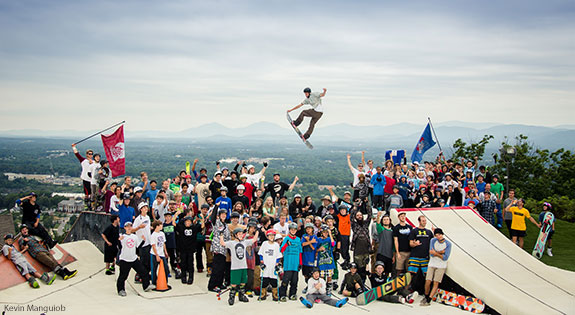 Liberty photographer Kevin Manguiob set up this shot at a Next Level camp at Snowflex in 2015.