DII Flames end semester by rolling over Terrapins at home 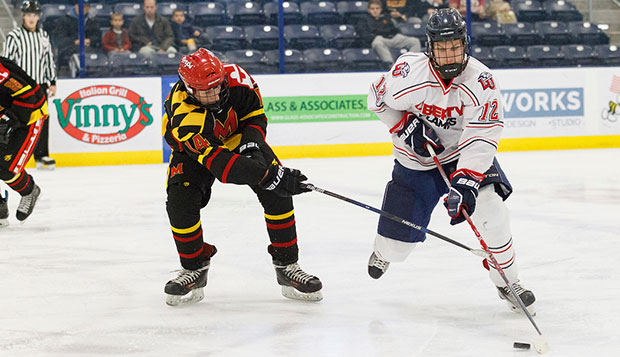 "We were very happy to get two convincing wins against a decent team and it was good to get back on the winning track after dropping that one (to Toledo) last weekend," Liberty Head Coach Chris Lowes said. "We were hungry to get a win and I wish we had games this next weekend to keep the momentum going, but it's also a good way to end the semester and go into the break on an emotional high."

In Friday's opener, the Flames scored on their second and fourth shifts and led 5-0 after the first period.

Then in Saturday's rematch, Blomberg netted the first goal 15 seconds after the opening faceoff on a wide-angled shot that took a fortunate bounce before Lamoureux scored twice in one shift in a four-goal third period to cap the scoring.

"That was demoralizing for them and we really took away their energy from the start," Lowes said. "We've been such a strong team when we're ahead that we kind of just went into cruise control. Our offense seems to be our biggest weapon right now. If teams don't lock us down, we can score in bunches quickly. We know we have the ability to score quickly and sometimes it's a matter of when not if we're going to open those floodgates."

Once they were open, the Flames maintained their momentum with wave after wave of potent scorers.

"The line of Logan, Docksteader, and Freymond was really rolling again and we rolled a deep bench," Lowes said. "It plays into our hands when we can keep guys fresh and roll lines and bring more energy every shift."

In goal, Liberty started Jordan Epp on Friday and Jacob Pierce on Saturday, with both allowing just one goal.

The Flames are off through finals week, Christmas, and the New Year before hosting Virginia Tech, Louisville, and North Carolina State at 3, 4, and 1 p.m., respectively, in the Jan. 13-15 Liberty Showcase.