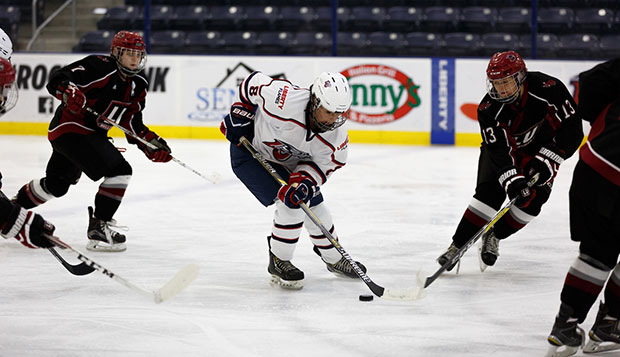 In Saturday night's rematch with Lindenwood Belleville, Liberty University's ACHA Division I women's hockey team allowed the Lynx to score three unanswered goals in the third period of a 4-2 setback, the Lady Flames' first ACHA loss at the LaHaye Ice Center since Rhode Island defeated them at home on Nov. 14, 2014.

The Lady Flames netted the only goal of the first period 9:11 before intermission when senior forward and alternate captain Courtney Gilmour skated the puck down the left wing and around the back of the cage before sending a beautiful cross-ice pass from along the boards to freshman forward Emily John with plenty of room to work at the top of the right circle.

John maneuvered the puck from her backhand to her forehand side and released a wrist shot through traffic that tipped off the stick of graduate forward and alternate captain Catharine Burrell into the upper netting past Lynx goalie Firth Bidois.

Liberty preserved the 1-0 lead by killing a five-on-three power play by Lindenwood after Chelsey Greenwood was called for pushing a Lynx defenseman into Bidois, causing both to crash into the net, following up a shorthanded breakaway opportunity by Lady Flames sophomore forward Lauren McDonald blocked high by Bidois.

With 8:14 to go in the second period, Lady Flames graduate forward and head captain Carrie Jickling intercepted the puck near the red line and skated all the way in along the left boards before wrapping a wrist shot from in the right crease inside the right post for a 2-0 advantage.

The Lynx cut the deficit in half with 2:17 left in the second after defenseman Alexandra Brown picked up a loose puck beyond the red line and sent a short pass to forward Alahna Stivers who sent it across the high slot to Hayley Winker at the top of the right circle. Her shot was blocked by Lady Flames sophomore goalie Kelly Hutton right to Stivers who finished the putback from the left crease inside the left post.

Burrell started the third period by clanging a fast-break shot from in the right circle off the crossbar.

Lindenwood quickly seized the advantage by netting the equalizer off another rebound when defenseman Jessica Moon started an odd-man rush with a short pass to center Ashley Dietmeier, who skated on net and lifted a wrist shot off the chest of Hutton. The puck bounced right back to Dietmeier in front where she finished five-hole from the right side, tying the score at 2-2 with 12:04 remaining in regulation.

The Lynx pounced on the Lady Flames for two more goals in the next four minutes to take the 4-2 edge when forward and captain Reagan Fuller, Lindenwood's leading scorer, flipped a backhanded shot in the slot past Hutton with 10:10 to go before skating around a defenseman along the left boards and flipping a backhanded assist to fellow forward Maddy Millar for a one-time finish near the right post with 7:54 to go.

Liberty barely outshot Lindenwood, 37-35, including 10-8 in the first period before the second and third stanzas were tied at 10 and 17 shots, respectively.

"It was a tough loss," Hutton said. "Everyone always plays up to us and they're a good team. We just didn't capitalize on some chances that we had and they did. They crashed the net and that's what won it for them."

The Lady Flames host their final two games of the semester next weekend, a non-league series against the Chesapeake Bay (Md.) Lightning. The puck drops at 2:30 p.m. Saturday and 9:30 a.m. Sunday.