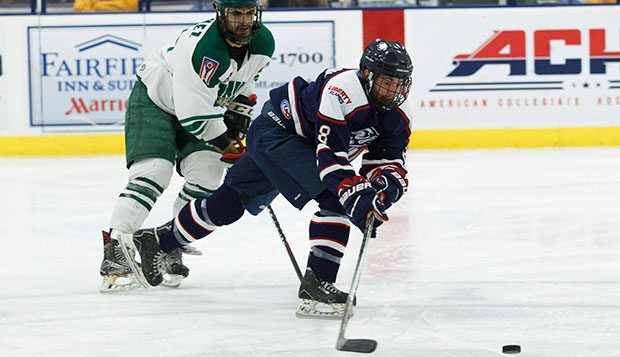 Freshmen forwards scored all four goals — including the go-ahead and game-clinching scores by Jamie Crane and Josh Hamilton, respectively, in the third period — for Liberty University's ACHA Division I men's hockey team as the Flames completed a two-game sweep of ESCHL rival West Chester with a 4-2 triumph Saturday afternoon at the Ice Line Quad Rinks.

"The first and second period, I didn't think we brought our A game," Liberty Head Coach Kirk Handy said. "The third period, we played a lot better. Credit to West Chester. They played a solid game."

The Flames (14-6, 8-2 ESCHL) struck first when freshman forward Quinn Ryan capitalized on fancy feeds from junior forward Grant Garvin and Crane for the go-ahead goal with 10:38 left in the opening period.

After the Golden Rams (6-12-1, 1-11) tied it with 6:45 remaining in the first, Flames forward Garrett Nelson deflected in a shot by freshman forward Brock Thompson set up by Hamilton on a power play three minutes later to take a 2-1 lead.

That's how the score remained until West Chester tied it again with 17:53 to play in the third period as Liberty could not capitalize on several second-period scoring opportunities.

"It was kind of a tug of war in the second period," Handy said. "Play went back and forth and it didn't feel like we were able to execute. There weren't many power plays, but we had some chances. We tried to refocus them and get them thinking positive (in the second intermission); our third period was our best period tonight."

With 16:25 remaining in regulation, Crane forced a turnover in the offensive end and launched a wrist shot from the top of the right circle, lifting the Flames to a 3-2 lead unassisted.

After sophomore goalie Blake Scott used his blocker to make a sprawling save of a shorthanded shot by the Golden Rams with 12:34 to play, Hamilton received a pass from freshman defenseman Basil Reynolds and netted the game's final goal shorthanded, accelerating past two West Chester defensemen and sneaking the puck past the goalie with 11:01 to go.

"When we were able to score that fourth goal shorthanded, that was a big one for us," Handy said. "Garvin was in the box and Hamilton got a pass from Reynolds and kind of took off. He went in, he went wide on the other side of the defenseman and just slipped it past the goalie on the way in."

Besides doubling them up on the scoreboard, the Flames also outshot the Golden Rams by two-to-one count, 50-25, with Scott making 23 saves.

Liberty travels an hour and a half to face Rutgers, another ESCHL foe, for a single game on Sunday starting at 3 p.m. at ProSkate Ice Arena in Monmouth Junction, N.J., as it will do again after a two-game series at Delaware in late January.

"We're going to regroup and get ready to play tomorrow," Handy said. "We have confidence in the guys. Special teams will be a big thing for us (on Sunday), power play and penalty kill."