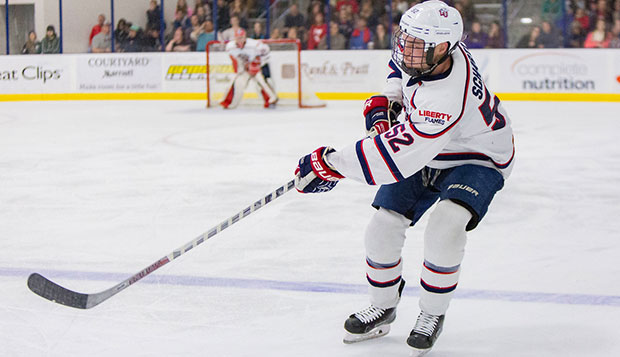 Liberty sophomore defenseman Zane Schartz had one goal and one assist in Friday night's opener against the Golden Rams.

Liberty outshot West Chester, 60-23, and scored all of its goals at even strength. The Flames improved on their penalty kill, which has had a 97 percent success rate over the past 15 games.

"We did the things we needed to do to be successful," Liberty Head Coach Kirk Handy said after the Flames (13-6, 7-2 ESCHL) eclipsed their win total from last year and improved to 3-0 against the Golden Rams this season. "We didn't score any power-play goals, but our PK was solid for us again tonight and we had contributions all up and down the lineup, which was nice. Guys were a little more intentional around the net."

"It was a great start," Handy said. "Roberts' line with Garvin and Quinn had a solid game."

Sophomore forward Marshal King made it 2-0 Liberty just two and a half minutes later with an unassisted wraparound score at the 17:00 mark.

Freshman forward Josh Hamilton (one goal, two assists) stretched the Flames' advantage to 3-0 off assists from freshman Basil Reynolds and sophomore defenseman Zane Schartz by cashing in on the rebound of his own blocked shot to cap an odd-man rush with 3:28 remaining in the first period. Midway through the second, sophomore forward Owen Harris padded the lead to 4-0 with a goal assisted by freshman forward Brock Thompson and Hamilton.

Less than five minutes into the third, freshman defenseman Garrett Nelson unleashed another one of his long-range missiles from the point, giving the Flames a commanding 5-0 advantage off assists from Hamilton and freshman defenseman Matt Cruickshank.

Sophomore defenseman Kyle Crane made it a 6-0 Liberty lead with 10:30 remaining in regulation by finishing feeds from sophomore forward Zak Hayes and senior defenseman and head captain Ben Hughes, playing in his first game back from injury.

Garvin put the finishing touches on the Flames' win by cleaning up a rebound in front of the goal after initial shots by Nelson and Schartz.

"We know we did the job we needed to tonight, but this is only one game," Handy said. "Our goal is to take each game as it comes. Now, we focus on (Saturday's rematch set for 4:45 p.m.) and getting better tomorrow. I think there's areas where we can refine from tonight, like for our power play to be a little more effective. We want to make sure we come out with a quick start. That was a key for us today."