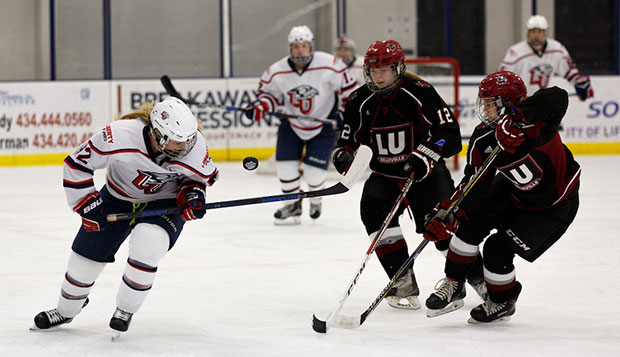 Liberty University sophomore forward Lauren McDonald's fourth shorthanded goal of the season tied Friday night's ACHA Division I women's hockey game against Lindenwood Belleville early in the second period. The Lady Flames, ranked No. 1 in the latest computer poll after sweeping top-ranked Adrian, scored twice more unanswered in the stanza before sealing a 3-2 victory over the No. 7 Lynx.

"After we beat Adrian, we had so much momentum and then we had a week off, so we're just trying to shake off that little bit of rust and get back at it again," Lady Flames graduate forward and head captain Carrie Jickling said. "We just came out flying in the second period, got a lot more shots, and crashed the net, so it worked out in our favor."

Lindenwood (8-5-2) came into the LaHaye Ice Center riding a five-game winning streak, with two of their losses one-goal setbacks to defending ACHA Division I national champion Miami of Ohio in early October. Liberty (10-6-1) had eliminated the Lynx at nationals last season by surviving a back-and-forth 6-5 triumph in pool play.

The Lynx leaped out to a 1-0 lead with a power play goal with just over a minute remaining in the first period after Liberty junior forward Chelsey Greenwood was taken down near the blue line. That essentially put Lindenwood on a five-on-three and Katie Stelling slid the rebound of a shot by Williams through traffic in the left crease and past Liberty freshman goalie Nadia Rupoli.

"They seem to step up to us when they're playing us and they come at us with a lot of speed and find opportunities within our weaknesses and they put the puck in the net," Jickling said.

Three and a half minutes into the second period, Lady Flames junior forward C.J. Tipping was called for hooking center Alicia Williams on a fast break, causing her to slide into the back of Liberty's net. That put the Lynx on a power play and McDonald, who has only scored three even-strength goals, stole the puck from Lindenwood defenseman Jamie Riselay along the boards in the Lady Flames' end and started a breakaway. She finished it unassisted with a shot from deep in the left circle past Firth Bidois, Lindenwood's goalie from New Zealand, into the top right corner.

"That's the kind of spark we need when we're taking too many penalties and spending too much time in the box," Jickling said. "We need those shorthanded opportunities to keep our momentum up when we're down a (player), so that was awesome."

Jickling capitalized on a broken play when graduate forward and alternate captain Catharine Burrell was taken down as she skated the puck across the crease. Jickling faked past Bidois and tucked the puck into the open net with a backhand, lifting Liberty to a 2-1 lead.

"I just kind of saw the puck squirt forward and no one was covering me so I found a lane and took it to the net and was able to beat the goalie," Jickling said.

The Lady Flames' third line added what would prove to be the deciding goal with 23 seconds to play in the second period when freshman forward Tiana Lisle, stationed in front of the cage, netted a backhanded putback off a shot from the high slot by sophomore defenseman Mackenzie Carroll that glanced off the stick of freshman forward Mackenzie Carrroll.

The Lynx converted the third period's only score when defenseman Jessica Moon stole the puck in the left corner and lifted a shot from close range into the upper netting with 3:05 remaining in regulation. But Rupoli would clamp down and preserve the Lady Flames' one-goal lead in the final minutes.

The two teams will face off again on Saturday night, when the puck drops at 7 p.m. back at LaHaye.