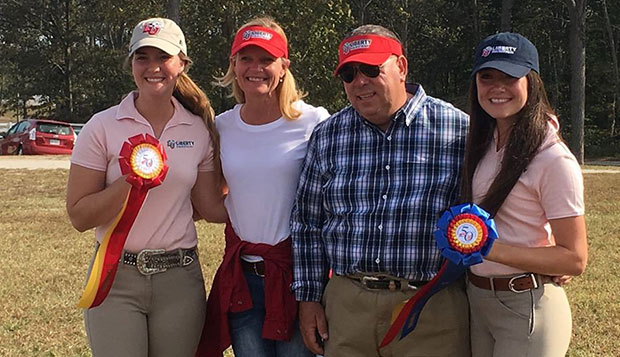 Everywhere she's competed and coached, Suzanne Flaig, Liberty University's new associate director of equestrian programs, has been in on the ground floor.

Flaig, who serves under Liberty Equestrian Center Executive Director Jim Arrigon and shares assistant coaching duties with Western Coach Lauren Eagles, started her collegiate riding career at Miami University of Ohio. As a sophomore in 1991, she was an Intercollegiate Horse Shows Association (IHSA) national champion for the reserve national champion RedHawks, coached by Arrigon, at an event hosted by Hollins College in Roanoke.

"The program had a long history and their success had kind of ebbed and flowed over the years," Flaig said. "It definitely surprised some people when we were reserve national champions that year. That elevated the program and kept it at that level of competitiveness."

After graduating from Miami of Ohio, she started riding professionally while serving on the coaching staff at Penn State before returning to her alma mater to attend graduate school and work with Arrigon.

From there, she moved on to Oklahoma State in August of 1999 after accepting a head coaching position, which she held for the next 15 seasons.

"Oklahoma State had only had a program for about nine months to a year when I started there, so I really got to put my stamp on it," Flaig said. "I was there for a long, long time so that was really fun, being a part of the inception of that program. There's definitely some similarities with (Liberty's) program really getting on its feet and moving forward."

After taking the past three years off from the sport to spend more time with her family, she wasn't searching to return to coaching until Arrigon contacted her to make an offer she couldn't refuse.

"I thought I retired from coaching, to tell you the truth," Flaig said. "The travel was pretty rigorous. It was a varsity sport and we did a lot of recruiting. Jim called me up and told me what was going on at Liberty, the commitment to the program, the type of kids that were a part of the program. After coming to visit and meeting some of the kids and seeing the potential that this program has and the direction that it's going, I thought, ‘If I'm going to go back to coaching, this is the job.'"

She is thrilled to work with a coaching staff that is passionate about what they do and young riders who are humble and eager to learn the ropes from some of the best in the business in what has quickly become one of the finest collegiate equestrian centers in the nation.

"It's really fun to see the construction and the growth and the interest, even in the few short weeks that I've been here," Flaig said. "I'm enjoying all of the levels again from a teaching standpoint, being able to see those kids progress in their own skills. Everybody's interest is piqued, I think, when they start to hear about what's going on out here."

A total of 18 teams will participate, including the top three from last season's national championships.

"That will be a great experience for the kids to kind of get out of their own neighborhood and see how they stack up against the competition at the national level," Flaig said. "We have a very young team (but) the kids are definitely fired up. They've had success and they're confident and motivated to continue on that trend."

She and the rest of the staff share a vision to develop the program into a perennial power at the regional and national levels, to put Liberty on the collegiate equestrian map and on the radar for potential recruits.

This year's IHSA nationals will again take place in Lexington, Ky., the same weekend as the Kentucky Derby.

"We have the opportunity to send a team there," Flaig said. "Our goal is to be a national-caliber team that can ride for a national championship each year."