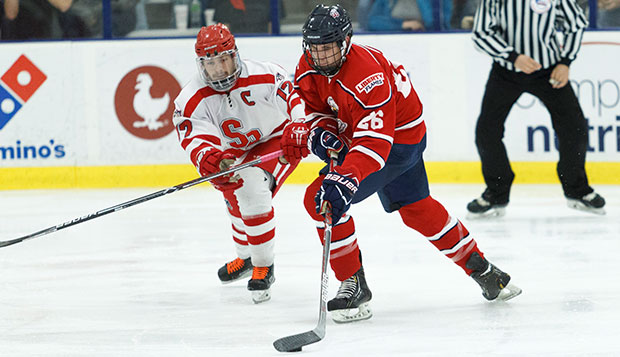 Liberty sophomore forward Marshal King works the puck past a Stony Brook defenseman during a recent series against the Seawolves at the LaHaye Ice Center.

A restful Thanksgiving break provided Liberty University's ACHA Division I men's hockey team time to recharge and get ready for this weekend's final road trip of the fall semester, when it will play three Eastern States Collegiate Hockey League (ESCHL) contests — Friday and Saturday at West Chester and Sunday at Rutgers.

"It's huge, obviously, a big weekend for us to play three conference games before the (Christmas) break," Flames Head Coach Kirk Handy said. "It's a great opportunity to go on the road and continue our push. Both Rutgers and West Chester gave us some great games down here (last fall and in late September, respectively), so we're looking forward to getting on the road and playing them up there."

Liberty currently sits in third place in an unpredictable ESCHL regular-season race, behind No. 17 Delaware, which it split with Nov. 11-12 at the LaHaye Ice Center, and Rhode Island, despite sweeping the unranked Rams, Oct. 14-15 on their home ice. Rutgers split its second two-game series with Delaware in early November after sweeping Stony Brook on Oct. 21-22 at home. West Chester and Rutgers split two one-goal games in their last action, a home-and-away series played Nov. 18-19.

"We know that all these ESCHL games have been tight this year," Handy said. "We're looking for three solid games up there."

The Flames' defense will be strengthened by the return of senior defenseman and head captain Ben Hughes, who has recovered from a lower leg injury.

Liberty scouting report: The Flames, who started the season at 8-1, have won three of their last four games after dropping four of their previous five. Behind Garvin's 13 goals and 14 assists, Liberty's attack is sparked by Schartz, an offensive-minded defenseman who ranks first in assists (15) and second in scoring (21 points). Freshman center Quinn Ryan (6G, 12A), sophomore forward Owen Harris (8G, 9A), and freshman defenseman Garrett Nelson (6G, 10A) round out the top five followed by freshman defenseman Matt Cruickshank (2G, 13A).

In goal, the Flames have platooned senior Matt Pinel (5-4, 3.43 goals-against average, 90.4 save percentage) and sophomore Blake Scott (6-2, 3.01 GAA, 87.4 SP) and could introduce junior Josh Halpenny into the rotation soon after he has recovered from offseason surgery.

Rutgers scouting report: The Scarlet Knights only feature two players who have reached double digits in scoring — forwards Brian Gnad (12G, 13A) and Kevin Fitch (9G, 8A). They have accounted for five of Rutgers' seven power-play goals. Christopher Marsillo has started 15 of 18 games in goal, posting a respectable 3.20 GAA and 91.7 SP.

All-time series: Liberty is 4-0 against Rutgers after sweeping the Ice Knights in the 2009-10 season and last Dec. 3-4 at the LaHaye Ice Center. The Flames also swept West Chester in their first ACHA series of the season and first meetings with the Golden Rams in more than a decade, Sept. 23-24 at home.

Coaches: Handy is in his 17th season as the Flames' head coach and has compiled an overall record of 358-159-25. West Chester is coached by Bill Swahl, now in his third season at the helm, who has posted a 22-54-3 mark. Rutgers Head Coach Martin Bernstein is 20-20-2 in his second season leading the Ice Knights.