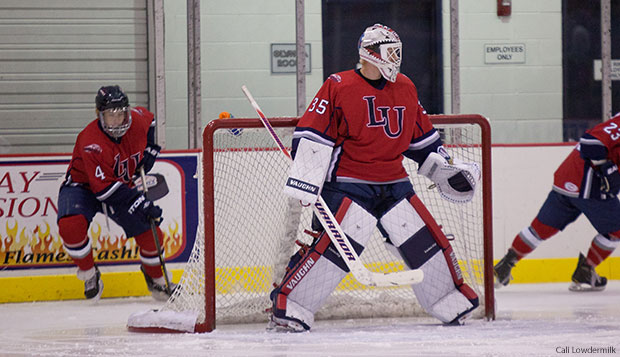 The Liberty Flames Division I men's hockey team is looking to get back on the winning track, following a pair of close losses to Davenport at the LaHaye Ice Center this past weekend, bringing their current losing streak to five games.

To break the skid, Liberty will have to make a statement when the No. 1 ranked Ohio University Bobcats make their first trip to the Ice Center. Ohio comes into the weekend doubleheader on a 10 game winning streak, following two home wins over No. 17 University of Arizona at Bird Ice Arena.

Liberty is no stranger to facing the No. 1 team at LaHaye as they faced the then No. 1 ranked Penn State Ice Lions in a doubleheader last year, taking the first game 4-3 as Jake Hannon finished off a Liberty comeback with a power play goal with nine minutes to go in the contest. Penn State took the second game 4-2.

Matchup: The Liberty Flames (8-5) face off with the No. 1 Ohio University Bobcats (10-0) Friday and Saturday at 7 p.m. in the LaHaye Ice Center.

Scouting Liberty: Liberty comes into the weekend on a five game losing streak, after starting the year 8-0. Liberty lost a pair of games to Davenport University 6-3 and 6-5 in a shootout as the Panthers clinched the first "Blue and Gray Cup." Rick Turner leads the Flames in goals (20) and points (32), both of which are tops in the country. Clayton Brown comes into the weekend with a 5-2 record and 2.87 goals against average.