No. 5 Lady Flames upset top-ranked Adrian on its home ice 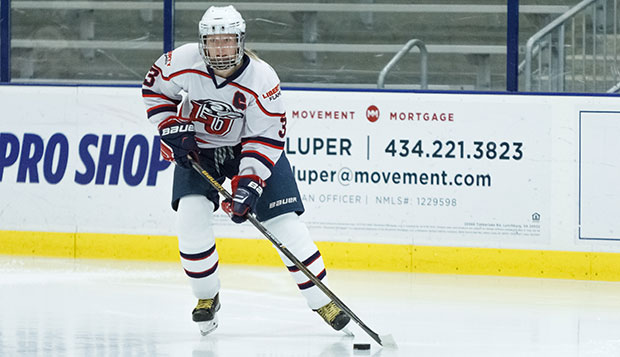 Liberty graduate forward Carrie Jickling was held scoreless on Saturday, but her top line scored both of the Lady Flames' goals.

"It was a battle, a competitive game tonight," Lady Flames Head Coach Paul Bloomfield said. "I told the girls after the second period, this game's going to be won or lost on a mistake or a penalty.  We outshot them, 36-30, so the game was pretty even. The difference was we only took three penalties and the last three penalties of the game were theirs. Both of our goals were on power plays. Our girls were pretty disciplined and stayed focused."

The Bulldogs (10-1) scored first with 15:10 left in the third period on a shot by forward Samantha Fortune that got past Liberty freshman goalie Nadia Rupoli, who made 35 saves for the contest.

Freshman forward Alex Smibert netted the tying goal for the Lady Flames with 5:49 remaining in regulation on a deflection of a shot by graduate forward Catharine Burrell. She received a pass from senior forward Courtney Gilmour in the corner and fired the puck into traffic in front of the cage and it ricocheted off Smibert's skate and into the net.

"There was a melee in front of the goal," Bloomfield said. "Everybody was there."

The two teams started the overtime in four-on-four, but Burrell took advantage of another Adrian penalty — this time a five-minute infraction after a Bulldog player fouled sophomore forward Lauren McDonald flagrantly with her stick against the boards — to score the game-winner in four-on-three play. She buried a shot from the left endline off an assist from junior defenseman C.J. Tipping with 1:04 to go.

"Burrell was down in the left corner, out about three feet out from the goal and it looked like too much of an angle, but she put it in the top corner from about the same spot where she fired the shot off Smibert's skate in the third period," Bloomfield said. "She had a good night last night, a good night tonight. Our top line is working well. (Graduate forward and head captain) Carrie (Jickling) didn't' score tonight, but she and (Gilmour) are working hard, too."

Rupoli, who's 5-feet, 10-inches tall, also withstood her share of confrontations around the cage to limit Adrian to one goal.

"Nadia did a good job," Bloomfield said. "It was a pretty physical game and they ran her four or five times (but) she took it in stride. She's a big girl."

The two top-five teams meet in a rematch on Sunday at 3 p.m. before Liberty (8-6-1) returns to the LaHaye Ice Center after Thanksgiving break for two games against seventh-ranked Lindenwood-Belleville on Dec. 2-3.