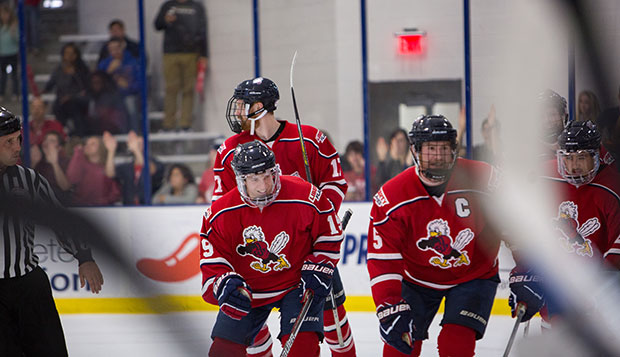 The Flames (12-6), who won Friday night's opener 3-1, matched their win total from last season and improved to 4-1 on the road by breaking open a tight rematch with three unanswered goals in the third period.

"It was a super physical game, and I was proud of the way our guys battled," Liberty Head Coach Kirk Handy said. "The third period might have been our best period of hockey this weekend. I liked our team's compete level in the third period. We had to play through some tough situations and we executed well, and shut them down on the penalty kill. Our penalty kill was 100 percent this weekend, which was exceptional."

Liberty, which outshot Oakland 39-22 for the game, erased an early 1-0 deficit with three scores in the final 10 minutes of the first period.

"It was a great breakout, and Nelson made a beautiful pass over to Hayes for the goal," Handy said.

With 31 seconds left, the Golden Grizzlies trimmed the Flames' lead to 3-2.

Three of Liberty's last four scores of the game came on deflections, the first by freshman forward Quinn Ryan who tipped in a feed in front from junior forward Grant Garvin for a 4-2 advantage early in the second period. Five minutes into the third, with the Flames on a power play, sophomore forward Owen Harris tipped in a shot by Cruickshank, extending Liberty's edge to 5-3. Just 45 seconds later, Nelson lifted Liberty to a 6-3 lead by finishing a feed from freshman forward Jamie Crane. The Flames went on a power play with 5:04 remaining in regulation and Garvin deflected in a shot by Harris for the final score.

Sophomore goalie Blake Scott got his second straight start and came up with a couple huge saves — one on a breakaway late in the second period to preserve Liberty's 4-2 lead. He benefited from plenty of support from his defensemen and PK unit on the night.

"It was a great way to wrap up our road trip and gives us some good momentum going into the Thanksgiving break," Handy said.

When the Flames return, they will have three big meetings with Eastern States Collegiate Hockey League conference foes on the road, two at West Chester and one at Rutgers, before returning to the LaHaye Ice Center for a second "Midnight Mayhem" matchup against Indiana University of Pennsylvania on Dec. 9-10.