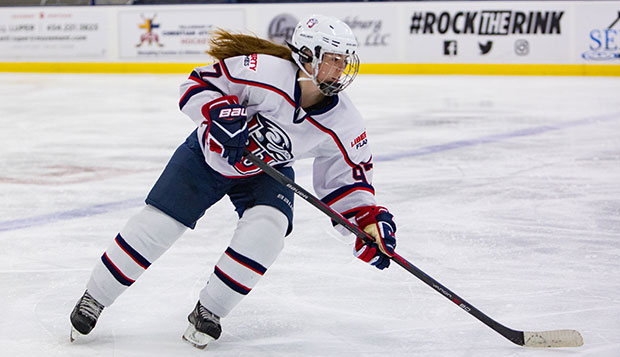 Friday night's 8-1 rout of Davenport at Patterson Ice Arena provided Liberty University's ACHA Division I women's hockey team, which slipped to No. 5 in the nation last week, an excellent opportunity to tune up for Saturday's and Sunday's afternoon showdowns at Adrian, the top-ranked team in the league.

Graduate forward Catharine Burrell and senior forward Courtney Gilmour both recorded hat tricks as the Lady Flames (7-6-1) moved above the .500 mark for only the second time this season, dominating the 14th-ranked Lady Panthers (5-7) in the shot department, 54-13, and on the scoreboard.

"We were playing really strong tonight," Head Coach Paul Bloomfield said, noting that a crowd of around 100 Liberty fans, including many family members down from Canada, were on hand to cheer the Lady Flames on. "We were a little slow getting started, but we got into the second period and the girls kind of took it away."

The Lady Flames erupted for three goals in the second period and four in the third to put the game out of reach with sophomore Kelly Hutton getting the start in Liberty's goal.

Burrell scored the first and third goals of the second period off assists from junior defenseman C.J. Tipping and graduate forward Carrie Jickling, respectively. Gilmour netted her first goal midway through on a power play assisted by Tipping and Burrell.

Burrell completed her hat trick less than four minutes into the third period off assists from sophomore defenseman Katie Comeau and freshman forward Alex Smibert before Gilmour got her second goal just eight seconds later, unassisted off the ensuing faceoff. She finished her trifecta less than two minutes later off assists from Tipping and Burrell before Vanessa DeMerchant capped the scoring with 5:47 remaining off an assist from fellow freshman forward Deena Birney.

Bloomfield said the Lady Flames must raise the level of their play to succeed against the Bulldogs, who moved into the No. 1 ranking after they upset defending ACHA DI national champion Miami of Ohio last weekend.

"Going into Adrian, we really need to carry that momentum forward against a team that's going to give us more competition," he said. "We've got to be consistent and stay out of the penalty box. We can't make the little mistakes, because when you're playing against a good team, they will capitalize."

Liberty won both meetings with the Bulldogs at home last season, 1-0 and 3-0, and lead the series 5-0 over the past three seasons, including a 3-1 triumph in the 2015 ACHA DI National Championship semifinals en route to its first national title.

"They've been climbing slowly," Bloomfield said of the Bulldogs. "They've got a pretty big squad, with about 35 girls. We've had our hands full with them two or three times in the past. I think we're a stronger team, but we haven't been a consistent team either. It's taken us a little time to get rolling."

Both Saturday's and Sunday's games are set for 3 p.m. opening faceoffs.