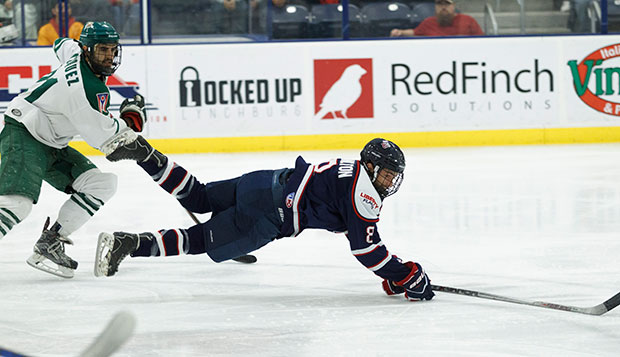 Flames freshman forward Josh Hamilton dives in an effort to get to the puck against Ohio. (Photo by Nathan Spencer)

Coming off a 4-4 split in its recent eight-game homestand, Liberty University's ACHA Division I men's hockey team travels to Michigan this week for a three-game, pre-Thanksgiving road trip.

The Flames will open their fifth-annual Blue & Gray Cup series with Davenport on Thursday night before taking on Oakland on Friday and Saturday nights in a rematch of the 2006 DII National Championship game.

After splitting their series with Delaware last weekend, the Flames rose five spots to No. 15 in this week's ninth ACHA DI rankings, replacing the Blue Hens who slipped to No. 16.

Liberty scouting report: The Flames battled to splits with first-year Eastern States Collegiate Hockey League rivals Stony Brook and Delaware over the past two weekends after being swept by Ohio and sweeping Niagara to start its homestand.

Besides senior center Grant Garvin, who netted two goals in Saturday's win over Delaware to raise his team-high season points total to 23 (11 goals, 12 assists), Liberty has received increased production from its 15-member freshman class in recent games. Freshman forwards Andy Clark and Josh Hamilton scored the go-ahead and clinching goals against the Blue Hens, supplemented by sophomores Owen Harris, Zane Schartz, and Kyle Crane, who accounted for three of the Flames' seven goals over the weekend.

By setting up three goals on Saturday, Schartz, a defenseman, moved into second place on Liberty's scoring list with five goals and a team-high 14 assists.

Behind freshman center Quinn Ryan (4G, 11A) and sophomore forwards Harris (6G, 7A) and Colt Steele (7G, 5A), two more defensemen rank in the top seven in scoring for the Flames, based primarily on their assists — freshman Matt Cruickshank (2G, 10A) and senior head captain Ben Hughes (1G, 10A).

In goal, senior Matt Pinel (5-3, 3.36 goals-against average, 90.1 save percentage) got both starts against the Blue Hens after sophomore Blake Scott (4-2, 3.32 GAA, 85.8 SP) played both games in net the previous weekend against the Seawolves.

Davenport scouting report: The Panthers have won three of the first four Blue & Gray Cups, clinching last year's best-of-three-game series by sweeping the Flames in their grand reopening weekend of the renovated LaHaye Ice Center. Davenport's only loss this year came when the Panthers were ranked No. 3 against fifth-ranked Adrian last Thursday at home in a game streamed on ESPN3. It then played defending ACHA Division II national champion Florida Gulf Coast University to a 6-6 tie.

Oakland scouting report: It's been nearly 11 years since the Golden Grizzlies edged Liberty in overtime of the ACHA DII championship game before going on to capture the Division I title the next year when both teams moved up to the ACHA DI ranks. Oakland, which has been outscored 57-37 this season, is coming off its first series sweep, last weekend at Kent State.

All-time series: Liberty is now 18-21-1 against Davenport in a rivalry that dates back to the 2005 ACHA DII national tournament. The Flames are 20-13-2 against Oakland after sweeping their four games against the Golden Grizzlies last season and previously in 2013-14.

Coaches: Kirk Handy is in his 17th season as Liberty's head coach with an overall record of 356-158-25. Phil Sweeney hos posted a 144-58-12 record through six seasons at the Davenport helm. In his first season at Oakland, Colin Ronayne is 4-8-1.