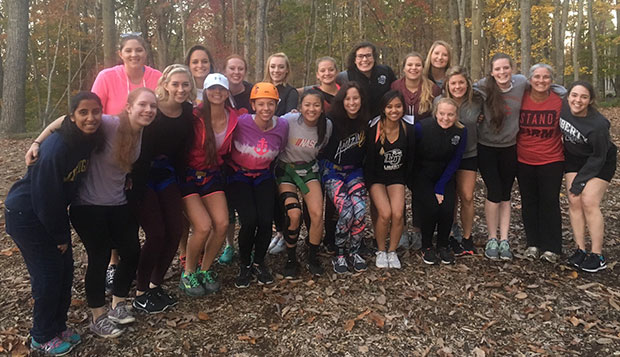 Liberty University's figure skating team took a short retreat from the LaHaye Ice Center to strengthen team bonds without skates on Saturday, Nov. 5, when they took on the Challenge Course at Hydaway Outdoor Recreation Center.

"Team members spent three hours together learning how to strategize, encourage, and conquer difficulties," Lady Flames Head Coach Dawn Harter said. "It was an absolutely beautiful day, a perfect day to be up there."

Student-athletes broke into two groups of 10 to participate in two different activities. While safely strapped in and supported by teammates who served as their belay crew, one group climbed a 20-foot pole one at a time and jumped off the top of it to touch a ball on the way back down. The other activity included climbing approximately 15 feet into the air to walk sideways across a wire bridge as they grabbed ropes dangling overhead.

"The Challenge Course director (Jacen Hamilton) and (Assistant Director of Outdoor Recreation Moriah Herring) said we had pretty good team unity," Harter said. "They cheered one another on to climb that high in the air and encouraged one another and pushed their teammates to do something they had not done before and they rose to the occasion. They even encouraged me to do one of the two events."

She said while the 25-member team has yet to enter any competitions, the skaters are making steady progress on and off the ice. Besides spending at least three hours per week on the ice, the Lady Flames do off-ice training twice per week as well as strength and conditioning classes.

"I'm very impressed with the students, the time and effort they're putting into their skating as well as their academics and their spiritual walk with the Lord," Harter said.

On Oct. 30, three skaters tested in front of judges at the LaHaye Ice Center to move up a level or confirm their classification status, with more planning to test next semester.

"(The United States Figure Skating Association) opened up a new level this year, Pre-Preliminary, which gives us another category to bring in skaters to skate at that level," Harter said. "We have a few skaters all the way through the ranks now, with at least one in every category."

The Lady Flames will put their skating skills to the first Eastern Sectional Intercollegiate test on Feb. 4-5 at MIT before hosting the second March 3-5 at LaHaye and concluding the regular season March 18-19 at Delaware. The top three out of 15 teams in the section will qualify for the Intercollegiate Championships. Delaware, Dartmouth, and Boston are the favorites to clinch those spots, but Harter is hopeful Liberty can move up a couple spots from its best-ever seventh-place showing last season.