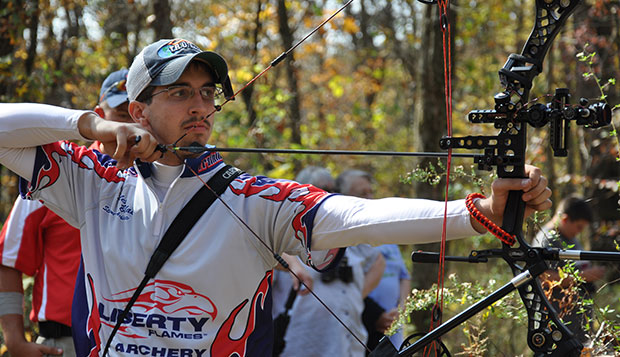 More than 100 archers representing 19 schools took part in the three-day competition. This was Liberty's second time at nationals, after the Flames claimed titles in three events last year.

"To bring back two national titles means a lot to the club and its supporters," said Brandon Reyes, Flames head coach. "The hard work and dedication that was devoted to practice and preparation paid off for all the athletes. All seven competitors competed at levels that were equal to or higher than practice rounds."

Reyes added he is excited for the future of the team, with a strong freshman class.

Rigney, of Gretna, Va., claimed the title in the Individual Men's Compound Division, making him the second-straight Liberty archer to do so. Blake, who finished third, won the title last year. Castello also competed in men's compound, finishing in fifth position.

The Flames compete next at the National Field Archery Association Indoor National Championships March 16-17, 2013, at the Kentucky International Convention Center in Louisville, Ky.