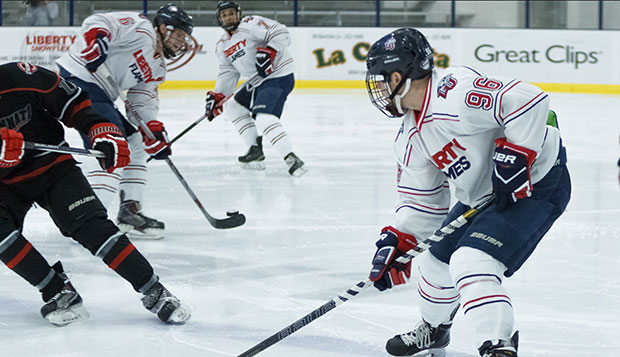 Liberty University's ACHA Division II men's hockey team raised its record to 12-0 with a three-game sweep over the weekend in the Ohio Showcase played in Athens, Ohio.

The Flames, the No. 2 team in last week's second Southeast Region rankings behind defending ACHA DII national champion Florida Gulf Coast, defeated better competition in each game. They shut out unranked Dayton 5-0 in Friday night's opener before holding off seventh-ranked Louisville 9-5 on Saturday and clinching the best overall record in the six-team tournament with an impressive 8-3 rout of fifth-ranked host Ohio on Sunday.

"We had control basically every game from the first period on," Liberty Head Coach Chris Lowes said. "Louisville had the No. 1 scorer in the entire country (Yannis Soukas, who the Flames held to one goal). Ohio is a really good hockey team, vastly improved from last year, and our first period (against the Bobcats) may have been the best period we've played all year."

In that contest, the Flames got three goals from senior forward Devon Docksteader and one from freshman defenseman Jackson Roy to open a commanding 4-0 first-period lead on Ohio, which had won its first two games in the showcase.

It was the third time in four games the Flames had recorded a hat trick, starting with Tim Bierema in the first period of last Sunday's 10-7 Mid-Atlantic Collegiate Hockey (MACH) triumph over Rowan at the LaHaye Ice Center. On Saturday, graduate forward Peter Kazmierczak netted three goals against Louisville to help Liberty open an 8-3 advantage after the second period.

"Each one plays on a different line so we're getting production from all over the place," Lowes said of the lines of Docksteader, who is complemented by senior Ben Freymond and graduate Danny Logan; Bierema, who is joined by junior Robert Ward, and graduate Tyson Street; and Kazmierczak, who works with senior Jordan Barstead and junior Paul Lamoureux. "Those three lines have really been rolling."

In Friday's opener against Dayton, Freymond and Kazmierczak ended a scoreless tie by scoring in the second period before Docksteader, Hisey, and Ward secured the win with third-period goals.

Freshman goalie Jarrett Epp posted his first shutout of the season against the Flyers and held the Bobcats to three goals on Sunday with solid support from the Flames' defensive pairings in front of him.

"We had some guys step up and play some important roles, as far as shutting down other teams' top lines," Lowes said. "Friday night was our first shutout, and it's important for us to have that focus all year long, of playing strong in our own end."

Fellow freshman Clayton Pierce started between the pipes on Saturday, when the Flames were shorthanded on four of Louisville's five goals. At even strength, Liberty held a 15-goal edge on its opponents over the weekend.

Eight of the Flames' 12 wins this season have been on the road, including seven of their past eight. Liberty returns to the LaHaye Ice Center for a showcase of its own this weekend with games set for Friday at 6 p.m. against undefeated Southeast Region rival Penn State; Saturday at 4 p.m. against Davenport, the top-ranked team in the Central Region; and Sunday at 2 p.m. against Toledo, ranked third in the Southeast.

"It'll be a daunting task for any of those four teams to come out with three wins," Lowes said. "We're pretty happy with where we're at right now. As coaches, we're right where we wanted to be in November. We still have a lot of work to do and a lot more potential."