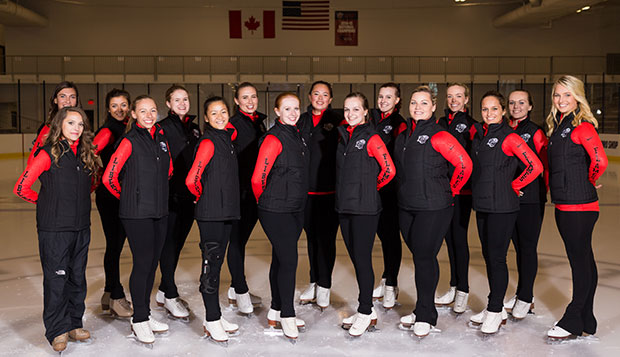 Two weeks after receiving encouraging feedback at its first critique at the LaHaye Ice Center, Liberty University's synchronized skating team will travel to the Orange County Sportsplex in Hillsborough, N.C., on Saturday for the 2016 Central Carolina Synchro Classic.

"It will be an opportunity to be critiqued on ice other than their home ice," Lady Flames Head Coach Tatiana Payne said. "We want the girls to learn and feel what the competitive edge feels like so they can work out their nerves and adrenaline, and gain experience from a competitive mindset."

She said the judges at the critique in late October gave the skaters constructive advice, but mostly praised their 3 minute, 9 second performance.

"Normally, judges will say things they would like to see changed in a routine," Payne said. "This was the first time we've had a critique where judges had no negative criticism, which is something we felt very good about. It was a confidence boost that encourages them to push themselves even harder to see how good we can get this year. The girls have a great attitude and they are very determined to have a successful season. I'm feeling very optimistic about what we will be able to accomplish as a team."

The Lady Flames have a roster of 14 synchronized skaters, which includes two alternates. Eight of the skaters also compete on Liberty's figure skating team.

"Our team is definitely looking the strongest it's ever been and we're very excited to see what we will be able to achieve as a team this year," Payne said.

At this Saturday's event, Liberty will be the only open collegiate program participating in the level 6.0 team competition, which includes skaters of any of the six levels below those using International Judging System (IJS) scoring.

The event will set the stage for the Lady Flames' Dec. 3-4 trip to Stamford, Conn., for their first open collegiate event, the Terry Connors Synchro Open, where they will meet Boston College, SUNY Oswego, and Mirror Images, a team made up of skaters from various schools.

"Most of the teams we'll be competing against at that open event placed better than we did at (Eastern) Sectionals last year," Payne said, noting that they will be among the favorites at this year's championship event set for Jan. 27-28 in Hershey, Pa. "There'll be hundreds of other teams of different levels from up and down the East Coast, which makes events like that great recruiting opportunities."

Liberty will travel to another spring competition two weeks before Eastern Sectionals, the Mid-America Championships Jan. 14-15 in Frasier, Mich., where it will compete against teams from the Midwest as well as the East Coast.

On Dec. 11, Liberty will host its "PraiseFest on Ice: Christmas Edition 2.0" at 5 p.m. at the LaHaye Ice Center. The synchronized skating team will perform its competitive program as part of that show which will include 18-20 numbers, including one by Brynne McIsaac, a U.S. junior national champion who competes all over the world and has committed to skate at Liberty starting next fall.