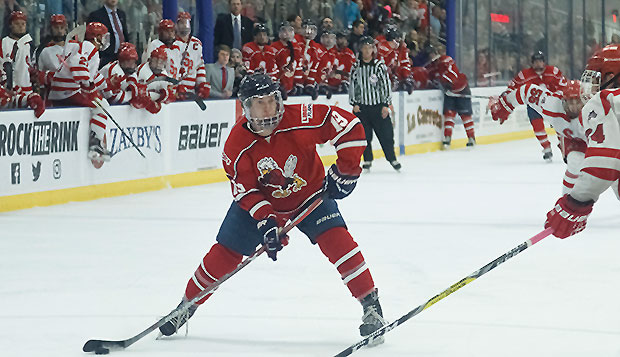 "It's a young team and I like what's going on in there," said Liberty Head Coach Kirk Handy, who deferred to Hughes to provide the post-game motivational speech. "Ben's talking to the guys and some of our senior leadership's got to step up. I believe in these guys and I have no doubt that we'll come ready to play again Friday night."

Hughes said the Flames need to start games the way they have finished them lately, playing with a sense of urgency.

"We know that the past couple games we could have come out a lot stronger," he said. "Our meeting was just to make ourselves aware and discuss how we can play the first 10 minutes of the game like it's the last 10 minutes. We always finish the game strong, and pick up the intensity in the third period when there's a sense of desperation. We talked about how we can come out more prepared and desperate at the start of the game."

There are certainly high enough stakes for this weekend's games against Delaware to light a fire on the Flames' bench. As important as last weekend's series against the defending league champion Seawolves was for Liberty, this Friday's and Saturday's matchups against the Blue Hens, the current ESCHL leaders, have even larger implications.

The regular-season champion will receive the automatic bid to the March 9-13 ACHA DI National Championships in Columbus, Ohio, and that may be the Flames' surest path to the postseason after they slipped eight spots to No. 20 in this week's eighth ACHA DI rankings.

Liberty scouting report: The Flames are paced in scoring by junior center Grant Garvin (10 goals, including three game-winners, 10 assists), who is complemented by freshman center Quinn Ryan (4G, 11A), and sophomore defenseman Zane Schartz (4G, 10A). Sophomore forward Owen Harris (5G, 7A), who netted the game-winning goal in Liberty's 3-2 shootout victory over the Seawolves, and freshman defenseman Matt Cruickshank (2G, 10A) are tied for fourth in scoring with 12 points apiece, followed closely by Hughes (1G, 10A), and sophomore forwards Colt Steele (7G, 3A) and Zechariah Roberts (4G, 6A).

Delaware scouting report: The Blue Hens' offense takes flight on the wings of John Redgate, the ESCHL Forward of the Month for October, when he scored 23 points (12 goals, including two game-winners, 11 assists in 14 games). On a team that has more than doubled opponents in scoring (67-33), Redgate is followed closely by Cole Zucker (8G, 15A) and six other players with double-digits points — Vincent Zingarelli (3G, 12A), Shane Mullin (5G, 9A), Pierce Lamberton (8G, 3A), Michael Nisky (5G, 6A), Jakob Defares (4G, 6A), and Maxwell Freeman (4G, 7A).

All-time series: Last season, after winning their first "Midnight Mayhem" contest against Delaware at LaHaye, the Flames dropped their last three meetings with the Blue Hens, who now lead the series 15-13-2.