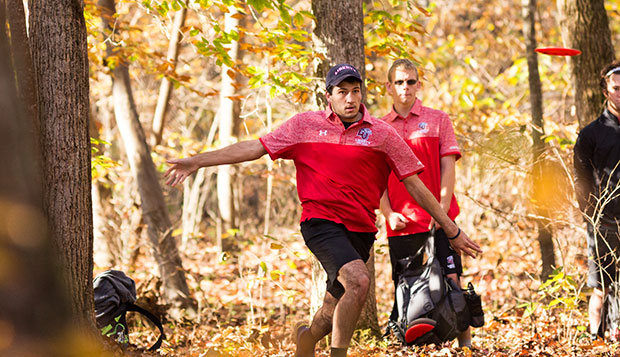 Senior Zach Ginsburg follows through on a drive off the tee during Saturday's opening round of singles play at the Flames' course near Liberty's Hydaway Outdoor Recreation Center.

The Flames' top team of sophomores Brent Prudich and Ryan Shumate and graduate students Dan Ballard and Devin Swartz won the six-team tournament, played on Liberty's 20-hole courses near the Hydaway Outdoor Recreational Center and on East Campus, with a combined score of 619 strokes. It was the fourth time in six years hosting the event that the Flames have captured the team title.

Since the Flames and Wolfpack, which placed third at last year's nationals, had already qualified for this coming spring's event, UNC and Elizabethtown earned the two national bids.

Liberty Head Coach Steve Bowman was pleased with the performances of his A, B, and C teams in both singles and doubles play on their home courses.

"Because we have 15 guys and only 12 spots, it was tough to battle up there and it was good competition for them all weekend," he said. "They all got a shot to be in there and prove what they could do and the make the adjustments accordingly."

Flames A team members Prudich (58-62) and Shumate (62-58) finished tied for first at 120, with Prudich winning a one-hole playoff for individual championship honors.

Bowman plans to enter Championship, First, and Second flight teams at nationals, which the Flames had already qualified for based on last season's best-ever seventh-place Championship finish.

For now, the Flames will gear up for the annual Winter Brawl Series, open tournaments played at several area courses starting in December. 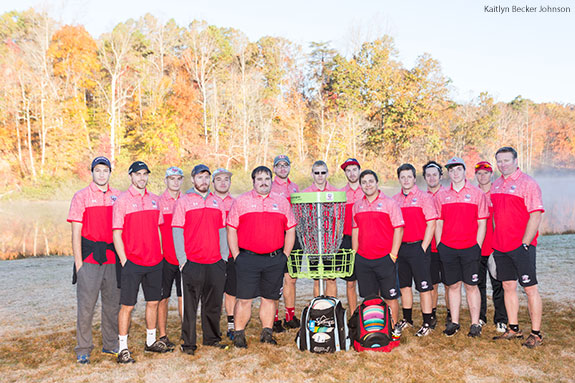 The Flames pose for a team picture before Saturday's first round on the course near Hydaway.