Rowers propel through traffic at Head of the Hooch regatta 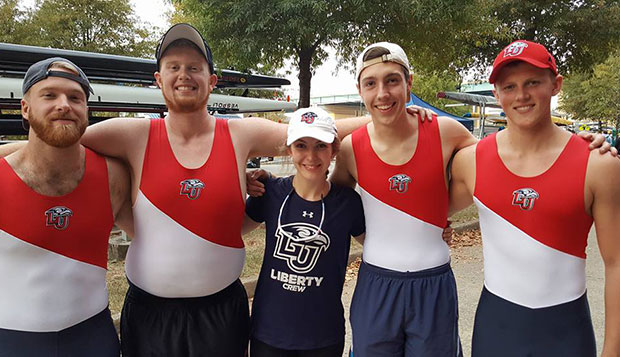 Boats from Liberty University's crew team entered in this past weekend's Head of the Hooch in Chattanooga, Tenn., one of the largest regattas in the world, didn't get lost in the crowd.

"This was the first time I'd taken the team to this regatta," second-year Head Coach Debbie Prowse said of the 5,000-meter course along the Tennessee River. "The course was well-marked, so it was easy for the coxswains to know where to go, which arches to go under of the three bridges they had to navigate through. We had perfect conditions. It was beautiful water both days, and the winds were minimal."

Prowse said the regatta was all-encompassing, with more than 2,000 total entries from Junior, High School, Novice, College Club and Championship teams, and Masters and Adaptive rowers as well.

On Saturday, the Lady Flames' Women's College/Club 4 — featuring junior Lydia Miller at coxswain, junior Alexandra Coughlan in the stroke seat, senior Moria List in the three seat, junior Katrina Ramos in the two seat, and sophomore Baillie Knecht in the bow — placed 19th out of 51 boats in 21 minutes, 6.9 seconds, just behind teams from Texas, Tennessee, and Ohio State.

"The women had their best row of the fall so far," Prowse said. "Everything came together. I was very pleased, happy with their progress. There were a cluster of teams there that we will meet up with at (ACRA National Championships in Gainesville, Ga., in May)."

"They did really, really well in a field that large," Prowse said. "They beat out several A boats, which was fantastic, including the University of South Florida, Chattanooga, Georgia, and Texas A&M."

Liberty entered a Men's Doubles skull on Saturday and a Men's Pair boat on Sunday. Though both finished in last place — the Doubles tandem of Moore and Krupansky was 20th in 22:20.1 and the Flames' Pair of Moore and Barrett took 10th in 21:41.2, sweeping with one oar and no coxswain — they gained valuable experience racing in small boats.

Also on Sunday, Krupansky earned a bronze medal for placing third out of six boats in the Men's Novice Single in 21:42.9, behind only singles from Texas and Palm River.

Liberty will carry a Women's 4, a Men's Novice 4, a Men's Pair, a Mixed 4, and a Men's Novice 8, including two guys who have never raced before, to Augusta, Ga., for Saturday's final regatta of the fall semester, the Head of the South.

Miller, who normally serves as coxswain, will have a chance to row in a Women's Double with Knecht, skulling with two oars each.

"It's going to be a fun time, a nice way to end the semester with a smaller, one-day regatta," Prowse said. "We'll make some lineup changes and give some opportunities to kids to race for the first time, which will be really exciting for them."