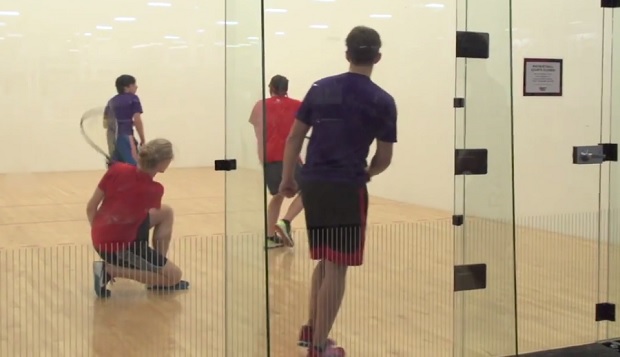 The Flames used the four courts at the LaHaye Recreation & Fitness Center and five more at Crosswhite Athletic Club (formerly The Sports Racket) to host the MACRC event.

The brackets were split between the two facilities with Divisions 1 and 2 playing at the CAC and Divisions 3 and 4 playing at LaHaye.

"Overall, the team played exceptionally well considering that many lower divisions were combined with higher divisions," Flames Head Coach Danny Rodriguez said. "On the bright side of that, the lower-level players are seeing the level of competition that they need to obtain to be competitive for future tournaments. The learning experience they achieve in every tournament is an experience they must take and build upon to get to the goals they set for themselves."

Those eight Liberty women joined forces to create four doubles pairs, with two competing in D1-2 and two in D3-4. Carroll and Schuler took fourth and Morse and Loforti finished fifth in D1-2 combined while Demetros and Richards were the runner-up tandem in the D3-4 combined bracket with Pearson and Marston finishing fourth.

Seibler and Jordan placed fourth in D1-2 Red doubles while Proehl and Alvaro Jaramillo finished second in D1-2 White, Messerly and freshman Spencer Heath won the D3 Red bracket, Tinsley and Fowler teamed up to take the D3 White title, and the duo of graduate Joshua Swiney and Walker won the D4 Blue bracket with Gauldin and Vence taking third.

Among alumni, coaches and faculty members, Liberty Assistant Coach Shawn Furman won the singles bracket and Rodriguez captured the singles consolation division before they combined to claim the doubles championship.