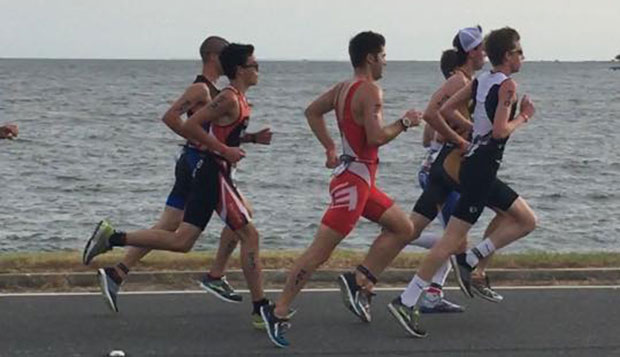 Merryman, who placed sixth as Liberty's first representative in an NCAA women's triathlon championship event, won her 20-24 age group and finished second out of 55 participants in 1 hour, 5 minutes, 55.8 seconds, behind only Kristen Sass, a former professional who was the USA Triathlon woman of the year last year, after Sass pulled away during the cycling stage.

"Megan said it was one of the highlights of her entire college experience," Spencer said of the weekend spent in New Orleans, joined by her father as well as Spencer and his wife, Kristina. "She had a fantastic two races in the draft-legal format and it was cool to be able to share that with her and for her to finish out her fall season at the top of the world in collegiate racing."

The races started with 5-kilometer runs, continued with 20K cycling stages, and finished with a 2.5K runs.

"This was Megan's first duathlon and she definitely likes triathlon better," Spencer said. "Megan's strength is her bike and run combination and the draft-legal format makes you a better triathlete with how hard you have to work."

Spencer, who qualified for next September's Triathlon World Championships in The Netherlands by placing second in his age group and 11th overall Saturday, crossed the finish line second out of 119 contestants in the men's duathlon and second in his 25-29 age group in 57:22.9, less than a minute behind Tim Henriot, also 27, who lives in New York but is from France.

"Before the race, I was doing my best to stay positive because I was really sore from the day before," Spencer said. "(Henriot) and myself worked together really well, maintaining a really fast pace. There was a group of 15 guys working together to try to catch us. He broke off the bike with about a 30-second lead and my goal was just to hold off everybody else for second place."

Spencer said his body wasn't as sore after the Challenge Roth IronMan-distance triathlon he completed in Germany this past summer.

"It was definitely a challenge," he said. "I'm going to need a week to recover."

He was thrilled to be able to compete in the two races on the same days as his top female athlete.

"That's what really makes our sport unique, that a coach gets to get into the mix as well," Spencer said. "It allows me to have a totally different perspective of the sport, as far as working out strategy for the race, and to have a deeper bond with the student-athletes because I know the pain they're going through firsthand."

Both Spencer and Merryman qualified for next September's ITU Sprint Duathlon World Championships in Penticton, Canada, but are planning to turn professional in December — Spencer in duathlon and Merryman in triathlon — in which case they would need to pass more trials to get into that race.

Spencer plans to bring Merryman, sophomore Travis Fehr, and freshmen Sam Blackmon, Thomas Sonnery-Cottet, and Tyler Figgins to the Clermont Draft Legal Challenge in Clermont, Fla., one of the most prestigious races in the country for the junior and collegiate age groups, the first weekend of March, when Merryman will make her debut as a professional triathlete.