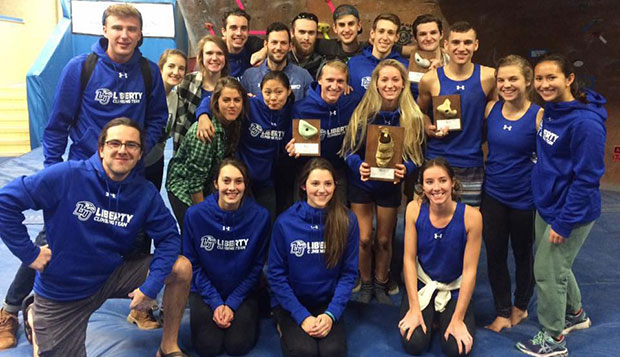 Competing in its first bouldering event in the Capital region of USA Climbing's Collegiate Climbing Series (CCS), Liberty University's first-year rock climbing team swept the first seven places in the men's division and landed six of its nine women's climbers in the top 10 in Friday's event hosted by River Rock Climbing in Roanoke.

"It was fantastic," Flames Head Coach Elliot Gaunt said. "It's a beautiful facility and the River Rock Climbing staff made everything run smoothly, so we were really happy with the way it was run. Quite a few spectators came out and they really enjoyed it, too."

A total of 32 men and 17 women from Liberty, Maryland, Radford, VCU, and as far away as Case Western Reserve (Ohio) participated.

"We had 17 of the 49 competitors so we were the best represented and most organized team that was there," Gaunt said. "The sport is growing, but not quite at the same level of other conferences in the country."

Liberty claimed the Golden Shoe, the first-place prize for overall team points, based on the finishes of its top six men's and women's climbers.

"It was really nice to take a team prize, to sweep the men's and have the girls compete very well, too," Gaunt said. "We did a very good job. All of the students competed very well and we were super proud of them."

Among the women senior Kathryn Aylett led the Lady Flames with her fourth-place finish.

"She wasn't even part of the traveling team, but she stepped up and did a phenomenal job to place fourth," Gaunt said. "She turned a lot of heads."

With the fall season complete, the Flames and Lady Flames will focus on training for the rest of the semester before traveling to events in Cullowhee, N.C., on Feb. 18 and Chatham, N.J., on March 4.

"We will have two CCS competitions in the spring and potentially regionals and nationals, if we qualify," Gaunt said. "We will be in the gym training with strength and conditioning, to build that up until the spring season starts."