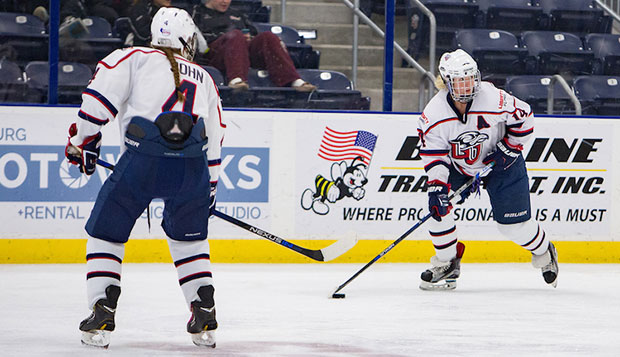 Liberty University's ACHA Division I women's hockey team played three games against Michigan schools at the University of Massachusetts' Mullins Center over the weekend, losing the first two by 4-2 and 4-3 scores against No. 5 Grand Valley and No. 7 Michigan, respectively, before evening its record at 6-6-1 (6-3-1 against ACHA opponents) with a 4-2 victory over No. 9 Michigan State on Sunday morning.

"It's a learning and growing period for the team," Liberty Head Coach Paul Bloomfield said. "We've been moving people around, trying different combinations that would work well together. We need to make sure everybody's going the same direction and clicking together. That takes a little time."

The Lady Flames, ranked second in the ACHA, struggled out of the gate in Saturday night's loss to the Wolverines, who they had swept decisively Oct. 14-15 at the LaHaye Ice Center. They dug themselves a 3-0 first-period deficit before their second and third-period rally came up one goal short.

Graduate forward Catharine Burrell got Liberty on the scoreboard four minutes into the second period off an assist from Lauren McDonald before freshman forward Mackenzie Carroll pulled the Lady Flames back within 3-2 with a shot from the blue line after the puck was came out to her following a melee behind the cage.

Michigan got one goal back before graduate forward Carrie Jickling netted the final score midway through the third period off assists from junior forward C.J. Tipping and Burrell. However, the Wolverines shut the Lady Flames out for the final 10 minutes to preserve the upset win.

"We had some chances, but not quality chances," Bloomfield said.

Junior goalie Rosie Kelly got the start and made 21 saves as Liberty outshot the Wolverines, 39-25.

On Sunday, the Lady Flames only outshot the Lady Spartans by a 42-36 margin, but pulled out the victory, making Sunday's long bus trip back to Lynchburg more tolerable.

In a back-and-forth battle, Michigan State scored the game's first goal with 11:42 left in the first period before Tipping tied it up six minutes later off assists from Jickling and freshman defenseman Tara Lee.

The Lady Spartans reclaimed the lead less than three and a half minutes into the second period before Burrell knotted it at 2-2 for the Lady Flames with 5:26 left in the period after receiving an outlet pass near her own blue line and taking it all the way in for the score.

"It was a nice, clean shot and she buried it," Bloomfield said.

Liberty got the game-winner just 30 seconds later when Greenwood finished a feed from sophomore forward Lauren McDonald before Jickling capped the scoring with an empty-net goal with 12 seconds remaining in regulation.

Bloomfield said Liberty showed some promising signs on the third day of the showcase.

"We played as a team today and it was a much better game," he said. "The girls were working hard. Catharine (Burrell) got the momentum going our way and less than a minute later, Chelsey (Greenwood) was able to get the go-ahead goal and we were able to keep them out."

Sophomore goalie Kelly Hutton got the start between the pipes and made 34 saves on the morning.

After taking next weekend off for College For A Weekend (CFAW) the Lady Flames will travel to Michigan for three games before Thanksgiving, against Davenport on Nov. 18 and Adrian on Nov. 19-20.

"They're both stronger than they've been the last couple years," Bloomfield said. "A lot of the teams in our league are a lot better. The competition's stiffer. All of those teams are gaining momentum. That makes us stay more on our toes, and be diligent."