Flames bounce back at Hardwood, spike to second in Silver 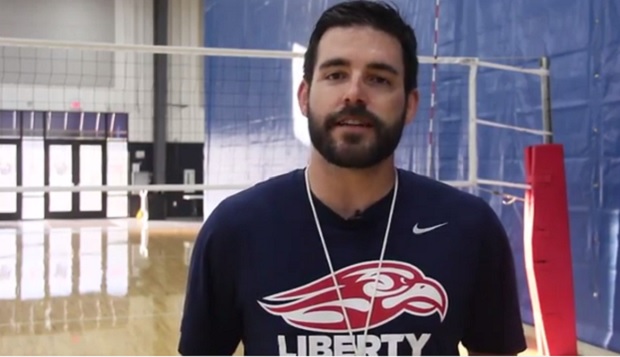 Liberty Head Coach Bryan Rigg was pleased with the way the Flames executed their game plan in Sunday's playoffs.

Liberty University's Division I men's volleyball team recovered from a less-than-stellar start in this weekend's Back to the Hardwood Classic hosted by Michigan State to finish runner-up in the Silver Bracket while it's Division II squad reached the Gold Bracket before falling to Xavier in the opener of the single-elimination playoffs.

"The competition was good, but we had our worst morning of the year so far," Liberty Head Coach Bryan Rigg said. "It was one of those days when the team didn't come ready to play."

Liberty showed improvement in Saturday night's Challenge Round, but still lost its crossover match to Purdue, 25-20, 25-19.

"If we had played the way we played against Purdue earlier in the day, we could have beaten Miami and Indiana and would have had a better morning," Rigg said. "Purdue's much bigger and their guys were much more physically dominant at the net."

Sunday was a different story as the Flames got into the flow of their offense after receiving a first-round bye and used more effective strategy in defeating Northern Illinois, 25-22, 25-17, and West Virginia in three games before being swept by Cincinnati in the final, 25-19, 25-22.

"Today was much better than yesterday," Rigg said. "We could have continued what we did yesterday or changed the tone and we changed the tone, which was great. The difference between yesterday and today was that our outside hitters Gene (De Jesus) and TJ (Forsyth) and our right-side hitter, Andrew (Eves) became reliable factors when we needed them the most."

The Flames had their most dominant performance in Sunday's first-round win over Northern Illinois.

"If we can turn teams into one-dimensional teams, we're very effective," Rigg said. "Their best players are their middle hitters and our blockers did a great job of taking away their middle hitters by putting up a good block and we were able to shut their attack down pretty quickly. Our middle hitters didn't get much action today, but they did great on defense. If they weren't blocking, they were at least getting touches on the ball and our offense was working to the outside. It was all working pretty well today."

Rigg said the Flames played their best matches of the weekend in the semifinal win over West Virginia and final loss to Cincinnati.

"Cincinnati was pretty strong up front and had a good offense and scrappy defense," Rigg said. "They had a great right-side hitter, and their setter ran a quick-tempo offense."
The Bearcats also had two servers that had unique approaches, left-handed and right-handed jump servers who served cross-court, making it difficult for Liberty's service receivers to pass to sophomore setter Kaden Knepper.

"Those guys were getting some scrappy balls up and they kept us going," Rigg said. "Our middle blockers did well, too, forcing the other hitters to adjust and go around the block and filling holes when they needed to."

Overall, Rigg was pleased with the way the Flames bounced back, giving them something to build on as they prepare for a tournament at Lancaster Bible College on Nov. 19.

"We have some chemistry to work on, to figure out who's going to play what position, but we feel pretty good about our play today and we're definitely right where we need to be at this point in the season to be in the top 20 in the spring," Rigg said. "Between this (Back to the Hardwood) and the Hoosier-Illini Classic in February, there are so many teams from the top 25 that we'll see at (NCVF) nationals."

"(Sophomore setter) Eli Plasterer continued to lead them," Rigg said. "He did a great job motivating as well as playing defense and setting."

Freshman Daniel Koloff provided excellent passing and consistent hitting alongside Sam Hess, who hit with great technique on the outside.

"As far as the middle hitters go, Nate Jenson stood out today, with a bunch of blocks and a lot of kills this weekend," Rigg said.