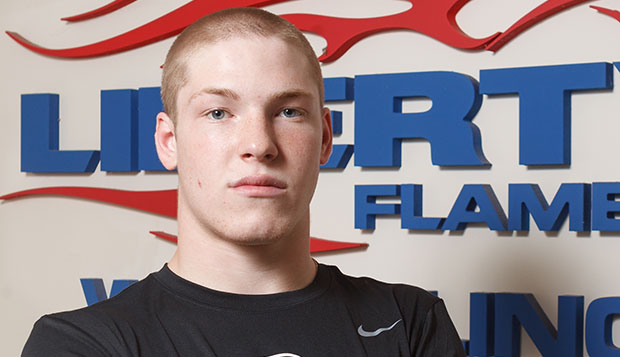 Liberty freshman TK Megonigal won his first tourament wrestling for the Flames at 157 pounds on Saturday.

Competing with a split squad, Liberty University's wrestling team turned in a solid fourth-place showing out of 12 teams at Saturday's Messiah Invitational in Grantham, Pa. The Flames had five individual place-winners including one champion to rack up 51 points, finishing behind tournament champion Messiah (131.5), Lycoming (88), and Wheaton (76) and ahead of fifth-place Ursinus (52).

"We did really, really well, much better than last year," said Liberty Graduate Assistant Chris Williamson, a Messiah alumnus. "Our guys looked really tough. After such a long preseason, our guys were antsy and anxious to wrestle someone else and a lot of them showed a lot of fight, which was a huge improvement, and against a lot of guys who were All-Americans, which is really impressive."

TK Megonigal, a freshman at 157, went 5-0 and defeated Messiah All-American Jeff Hojnacki, who's ranked second in NCAA Division III, in the semifinals, 8-4. He then broke open a 1-1 tie in the third period of the final against Gettysburg by countering a move and scoring with 20 seconds left for a 3-2 decision.

At 149, Brandon Robinson went 4-1 and placed third after defeating Messiah's Adam Peris, 5-2, in the consolation final. He was one of three Flames consolation champions along with senior Patrick Scarborough at 165 and freshman Sam Karel at 174.

Scarborough lost his first-round match before winning six matches in a row, including recording his second technical fall in the third-place bout, routing Ursinus' Bobby Enby, 18-3. In his first wrestling action in two years, he relied on a Mason Tilt roll to put his opponents away.

"He's been using it on everyone and guys just can't get out of it," Williamson said. "This was his first college tournament and he was dominating everyone after losing that first match."

Liberty will travel to Ursinus outside of Philadelphia next Saturday to compete in the Fall Brawl.

"That'll be a really tough tournament as well, with a bunch of (NCAA) Division I teams there, including Army," Williamson said.