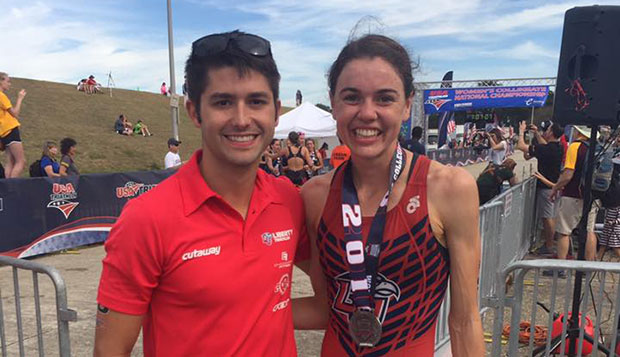 Competing as one of only about a dozen club triathletes in the field of 75 who represented mostly NCAA programs, Merryman completed the 750-meter swim in Bayou St. John, 20-kilometer cycling stage along the lakefront to the campus of the University of New Orleans, and 5K run in 1 hour, 3 minutes, 40 seconds, fast enough for sixth place overall.

"All of her hard work really paid off and she really just proved she's one of the top collegiate triathletes in the country," Liberty Head Coach Parker Spencer said. "It's a good way to end her fall season as a senior, especially qualifying for her professional license, which was a goal from the start of the season."

Merryman was the 28th swimmer out of the water in 10:46 before steadily moving up among the leaders.

"The water was choppy and there were rough conditions but she was able to have a really good swim then she was able to pass quite a few girls in the transition to get in with a really strong pack of cyclists," Spencer said. "They stayed within sight of the lead girls and she ran a lot of them down in the 5K."

She finished the cycling stage in 33:20 before clocking the second-fastest run time of 18:25.

"She just kept passing more and more girls and it was a really tight race, particularly between fourth, fifth, and sixth place," Spencer said.

The third and fourth overall finishers — Jocelyn Bonney (1:02:25) and Tereza Zimovjanova (1:03:15) — were from Queens of Charlotte (N.C.), an emerging NCAA program that won the Mid-Atlantic Conference championships hosted by Liberty on Oct. 15 at Smith Mountain Lake.

"That speaks to how competitive our conference is in that three of the top six girls were all from our conference," Spencer said. "Every single girl in front of her and some of the girls she beat are professional triathletes already."

"Putting this in perspective for Megan, three years ago, this girl had never done a triathlon in her life," Spencer said. "The amount of development she's made in three years is just incredible. It's a proud moment for a coach to see someone come so far so fast. A lot of it is her work ethic and mindset and ability to push herself to new limits. It speaks to Liberty and its ability to develop athletes. If they're dedicated and work hard, the sky's the limit as to what they can accomplish at Liberty."

Spencer, a 2012 Liberty graduate, also competed in Saturday morning's USA Triathlon Draft-Legal World Championship qualifier, placing second in his 25-29 age group and 11th overall in a strong field with several international triathletes. He earned a bid to the 2017 ITU Sprint Triathlon World Championships in Rotterdam, The Netherlands, a race that Flames freshman Thomas Sonnery-Cottet is also trying to qualify for to represent France.

"Both of us definitely should be able to qualify for the Duathlon Worlds," Spencer said. "If it goes well and I place well overall, that will qualify me for my pro duathlon license."

Merryman will continue training through the winter to prepare for her third and final USA Triathlon Collegiate Olympic-Distance Championships race representing the Lady Flames in late April in Tuscaloosa, Ala. That event features mostly club triathletes, but is also open to NCAA participants.