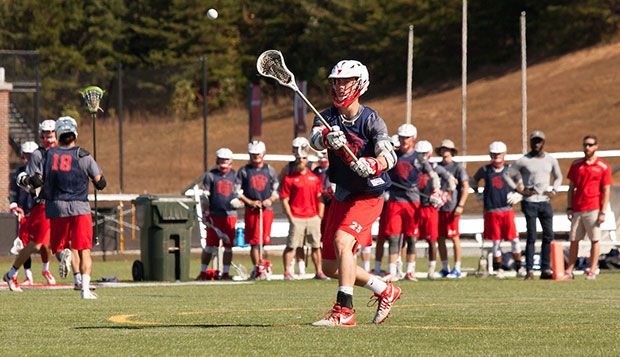 "From the coaches' perspective, we did not perform to our abilities," Flames Head Coach Kyle McQuillan said. "Virginia Tech, to their credit, came in well prepared. The bad news is we definitely got beat by a good team. Obviously, we need to play much better than that to have the type of season we want. The good news is this gives us an opportunity to identify things we need to fix."

Liberty, which was projected as the fourth-best team in the SELC in its preseason poll released this week, will look to turn the lopsided loss into a positive building block heading into its spring season, which opens Feb. 18 at home against East Carolina.

"Positives will come from how they respond and at practice this week," McQuillan said. "Unfortunately, we've got to wait until February for their next contest. But that might be the fuel they need to work hard over the winter. With this group of guys we have, I am confident they're going to use it as an opportunity to build and develop as a team and as a learning experience. The players need to know if you're not mentally and physically prepared, this kind of outcome can happen. We recognize we are far from perfect and there's definitely a lot of room for improvement."

Virginia Tech jumped out to a 4-0 lead in the first quarter before the Liberty battled back to keep it relatively close in the first half. However, things unraveled for the Flames in the third quarter, when the Hokies held them scoreless while padding their advantage.

"Their ability to make us pay for our mistakes was the issue," McQuillan said. "We made a lot of unforced turnovers and mistakes in transition and Virginia Tech made us pay for our mistakes. They capitalized. With as young a team as we have, and the number of freshmen we have, that was not unanticipated, but it was definitely disappointing. As a whole, as a team, we definitely failed to play at a high level, regardless of the position."

Areas where the Flames realized they need to improve the most at this stage of the year is in winning ground balls and faceoffs, as well as running their transition game and set offense off of them.

"Our possession game as a whole needs work as Virginia Tech was able to dominate in faceoffs," McQuillan said.

The Flames will look to put the loss behind them this weekend, when they host their annual Red vs. Blue scrimmage on Friday night to showcase their skills for at least 23 prospective recruits in town for College For A Weekend (CFAW) and Saturday's Recruitment Camp and Combine Scrimmage.

"We want to have a good game (Friday night) that showcases our players so our recruits can see the level of play they can anticipate if they come here," McQuillan said. "Then, Saturday's combine scrimmage will be our first opportunity to watch potential recruits for our program play and do some evaluations before we start naming individuals for next year's recruiting class by early spring. It's part of the puzzle we need to get before moving forward."