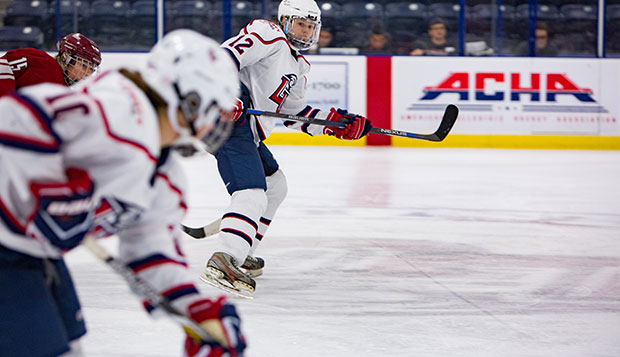 Lady Flames freshman forwards Mackenzie Carroll (12) and Aly Morris (10) work a fast break in a 3-1 win over UMass on Oct. 22 at the LaHaye Ice Center. (Photo by Caroline Cummings)

The Mullins Center, home of the University of Massachusetts in Amherst, Mass., has not been a fortunate place for Liberty University's ACHA Division I women's hockey team to play this season.

After suffering their only ACHA loss of the season to the Minutewomen on their Olympic-sized home ice on Oct. 8, the second-ranked Lady Flames (5-5-1, 5-2-1 ACHA) fell to No. 5 Grand Valley State, 4-2, Friday night in the same arena, despite outshooting the Lakers by a commanding 61-19 margin.

"It was kind of one of those frustrating nights," Liberty Head Coach Paul Bloomfield said. "There weren't a lot of penalties, but we didn't play real well and experienced some growing pains. Their goalie's strong, and we made a couple mistakes and they were able to capitalize."

It was the first of three games for the Lady Flames against opponents from Michigan on neutral ice in the six-team showcase. UMass, ranked third behind Liberty and No. 1 Miami of Ohio, lost the first contest of its home tournament earlier on Friday against the Lady Spartans, 2-0.

Grand Valley tied it up six and a half minutes later before sophomore forward Lauren McDonald put Liberty back on top by finishing feeds from junior forward Chelsey Greenwood and sophomore defenseman Katie Comeau at the 9:49 mark. The Lakers netted the equalizer with 5:34 left in the second period, taking advantage of an interception to score shorthanded.

"We were on a power play and had a bit of a breakdown," Bloomfield said. "Carrie (Jickling) was bringing the puck out from behind the net and passed it to Catharine (Burrell) and didn't get enough on it and they jumped the pass at the blue line and scored the tying goal shorthanded."

That was the first of three consecutive goals, by Grand Valley's Kendra Myers, who put the Lady Flames away with a power-play score with 11:01 left in the third and the clincher with 8:20 remaining in regulation.

"We just couldn't seem to get things going," Bloomfield said. "We played OK, and got a lot of shots on their goal, but not a lot of good, hard shots. We couldn't get our wheels turning under us. We have to get back to business tomorrow."

The Lady Flames will face Michigan on Saturday at 7 p.m. and Michigan State on Sunday at 9:30 a.m. before traveling to Michigan before Thanksgiving to play two games at Davenport and one at Adrian from Nov. 18-20.