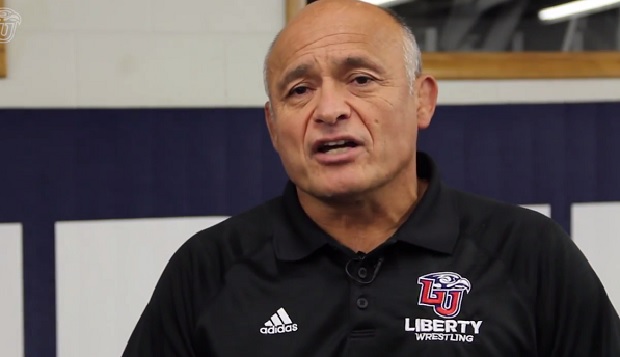 Flames Head Coach Jesse Castro is excited about the recruiting class that will make its debut this weekend, split between two tournaments.

"I'm excited about it," Liberty Head Coach Jesse Castro said. "I'm looking forward to seeing the guys compete for the first time. They're biting at the bit, no doubt about it."

Besides sophomore 184-pounder Josh McIlhenny, junior heavyweight Thomas Bartholomew, and senior 235-pounder Charlie Hancock, Castro will send a handful of freshmen to the Virginia Beach tournament, including 133-pounder Ashton Robinson, to give them some experience without throwing them into the fire.

"I'm extremely excited about this recruiting class," Castro said. "The only down side is most of our recruits are in the middle weights. It's a good problem to have that amount of depth there, but it would be nice to have more lightweights and heavyweights, too."

Liberty currently doesn't have anyone who can meet the weight requirement to wrestle at 125 or 133 pounds, with Robinson likely to wrestle at 141 this weekend in Virginia Beach and junior Tyler Sigler still recovering from last season's knee surgery, but looking promising in practices so far.

Megonigal will be in the same bracket Saturday as a Messiah wrestler ranked fourth nationally at the NCAA DIII level.

"He and our other captain, Taylor Westlake (a 184-pound sophomore), are setting the pace and doing a good job of taking initiative to lead them all (in the wrestling room," Castro said. "Taylor was a freshman last year, but we were so impressed with leadership and optimism that we made him a captain. He's pretty strong, but Josh is at a different level. They push each other, for sure."

Other Flames wrestlers to watch include returning All-American Brandon Robinson at 141 pounds; senior Ike Podell, an All-American in 2015; junior Michael Bryant at 165, and freshman transfer Vinny Levin at 174, where he will contend with Ferenczy for starts in dual matches.

"That's a solid weight class for us," Castro said. "Our middleweights are not superstars, but they're solid kids and I'm looking forward to seeing them develop."

Junior David Smith will bump up from 184 to 197 while the Flames feature Hancock at 235 pounds and sophomore Dominick Johnson at heavyweight, where he lost to All-American teammate Josh Travers at last year's NCWA Grand Nationals.

Host Messiah is Saturday's tournament favorite after placing third at last year's NCAA DIII National Championships and being ranked third at that level in the preseason.

The Flames are ranked fourth as a team with 45 points in the NCWA preseason poll, which is where they placed at last season's NCWA National Championships in Kissimmee, Fla. Only defending national champion Emmanuel (81), Central Florida (54) — which Liberty will likely see at the Jan. 13-14 Virginia Duals — and Grand Valley State (46) are ranked higher. The Flames are projected ahead of fifth-ranked Mid-Atlantic Conference (MAC) rival Middle Tennessee State (51).

Castro hopes Liberty can move up the ranks before hosting the NCWA National Duals for the first time, Jan. 27-28 at the LaHaye Ice Center and capture its sixth consecutive MAC championship when it hosts that tournament in the LaHaye Multipurpose Center on Feb. 25. That serves as a qualifier for the March 9-11 NCWA Grand Nationals in Allen, Texas, where the Flames captured their first national championship as a team in 2014.

"We don't have quite the amount of talent as that team, but I think we have an outside shot," Castro said. "It's a tall order. It's going to be a barnburner. We've got to work our tails off for sure."

He said tournaments such as the Messiah Invitationals as well as the Nov. 12 Fall Brawl hosted by Ursinus College outside of Philadelphia and the Nov. 19 Joe Parisi Open near St. Louis should prepare the Flames well for another national title run.

"These are important for us, tournaments where you garner rankings and prep us for the postseason," Castro said. "Ultimately, we're training for the NCWA tournaments at the end of the year, in January, February, and March. That's the goal."