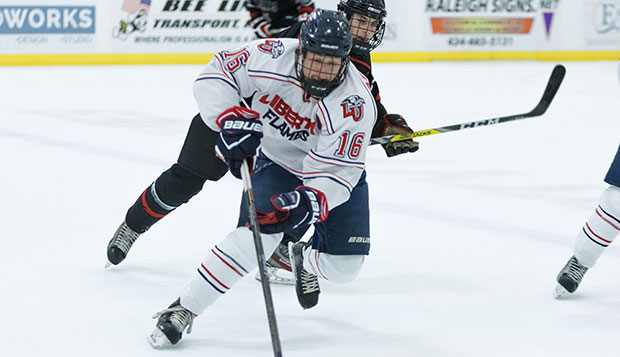 "Jordan walked in at the slot and scored the game-winning goal for us," Liberty Assistant Coach Blair Bennett said. "It was a beauty. He froze the goalie with a good fake and put it over the goalie's blocker side."

Senior Ruel Galang started in goal and made 32 saves as the Mustangs outshot the Flames, 35-33.

"Ruel Galang came up from the DIII team to play goal for us today and he was real solid in net for us," said Bennett, a former goalie for Liberty's DI and DII squads. "He made a bunch of good saves to keep us in it."

He said the level of competition in the contest was fairly even, as the final score and shot totals would suggest.

"We were comparable," Bennett said. "It was a well-matched game for us and a good opportunity to give our guys a little more of a challenge. We faced a little adversity on the road. We had a lot of good scoring opportunities and could have had a few more goals."

Senior forward Devon Docksteader got the Flames on the scoreboard in the first period, which ended deadlocked at 1-1, before Stevenson seized a 3-2 lead after the second, when junior forward Paul Lamoureux was Liberty's only goal-scorer.

Then in the final 10 minutes of the third period, senior forward Ben Freymond netted the equalizer on a rebound of a shot that bounced off Stevenson's goalie's pad and onto Freymond's stick, and the Flames shut down the Mustangs to force overtime.

"All of our lines played pretty well tonight," Bennett said. "We were rolling all of our guys and putting together a few strong shifts in the third that led to Freymond's tying goal."

Liberty will return to the LaHaye Ice Center on Sunday for a 2 p.m. showdown with Mid-Atlantic Collegiate Hockey (MACH) North Division foe Rowan, when freshman Clayton Pierce will get the start in goal for the Flames.