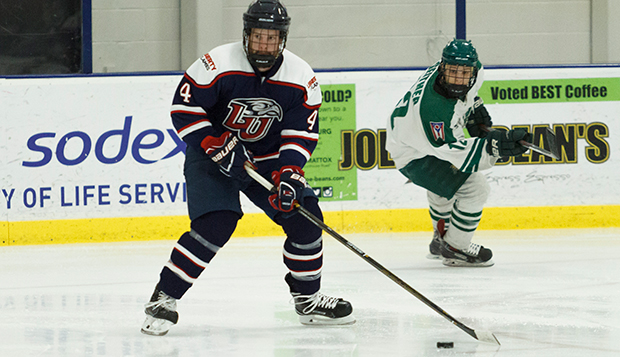 The first week of computer rankings created some major movement in the season's seventh ACHA Division I men's hockey Top-25 poll, without coaches' voting factoring into the equation.

Liberty University's ACHA DI men's hockey team climbed four rungs to No. 12 —  replacing Eastern States Collegiate Hockey League (ESCHL) opponent Delaware (14-1), which dropped six steps to No. 18 — despite being swept by the visiting Bobcats, who moved back up three positions to No. 2.

The Flames' opponent for this weekend, defending champion Stony Brook, came in at No. 17 after splitting its series with unranked Syracuse at The Rinx, the Seawolves' home ice, winning Saturday's opener 5-1 before losing Sunday's rematch, 5-3.

Typically, the top 15 ranked teams make the 20-team field for the ACHA DI National Championships, which will be played in Columbus, Ohio, site of all three men's and both women's ACHA tournaments, from March 9-19. There are also six autobids awarded to conference champions and a few of those often come from teams not ranked in the top 20.

This is the first season Liberty, an independent team for its first 10 season at the ACHA DI level, will have a shot to clinch one of those bids by winning the ESCHL regular-season title. That makes this weekend's series against Stony Brook all the more critical, especially playing at the LaHaye Ice Center.

The Seawolves have won the past five meetings with the Flames, snapping Liberty's six-game winning streak last season with a decisive sweep, Jan. 9-10 in Long Island, N.Y.

"It's a conference game and it's huge," Liberty Head Coach Kirk Handy said. "Our guys will be ready to go."

Saturday will be Military Appreciation Night, with free admission given to all active service members with a military ID and camouflage jerseys auctioned off throughout the contest.

Liberty scouting report: The Flames were limited to two goals over the weekend, the first of the season by senior defenseman and head captain Ben Hughes and the first of his Flames career by freshman forward Andy Clarke — on a deflection of a shot by freshman defenseman Matt Cruickshank, the ESCHL Rookie of the Month for October.

Senior goalie Matt Pinel (4-2, 3.48 goals-against average, 89.7 save percentage) started both games against Ohio between the pipes but was replaced by sophomore Blake Scott (3-1, 3.29 GAA, 84.2 SP) with the Flames trailing 5-1 in the second period of the second game and Scott held the Bobcats to one goal over the final 33 minutes.

Stony Brook scouting report: After sweeping ESCHL rival Rhode Island to start the season, the Seawolves were swept by Adrian, currently the No. 3 team in the nation, before sweeping Niagara and splitting series with league foe Rutgers and Syracuse.

Stony Brook, which graduated three of its top four scorers from last year (all but reigning ACHA player of the year JT Hall), who accounted for a total of 124 points, has only outscored opponents by a 40-29 margin so far this fall after posting a 28-2-2 record with a 176-85 goal differential.

All-time series: Even after losing the past five matchups, Liberty still leads the series with Stony Brook, 19-10-3.