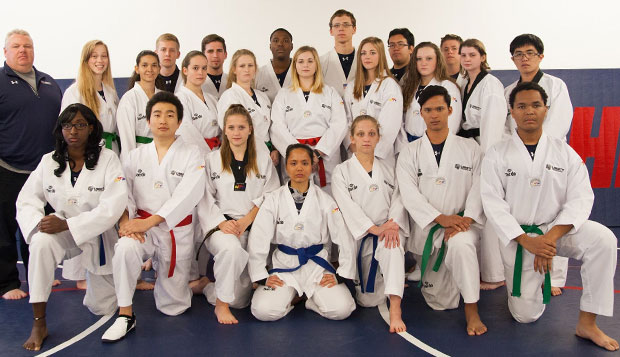 Liberty University's tae kwon do team competed in its first East Coast Taekwondo Conference (ECTC) tournament on Oct. 15 at MIT and its first Atlantic Collegiate Alliance of Taekwondo (ACAT) tournament of the fall semester, this past Saturday at UNC-Chapel Hill.

The event at MIT drew a record 477 athletes from 29 schools, including ACAT member Duke.

"I was really impressed with how everybody performed and responded under pressure," Liberty Head Coach Tom Childress said. "The teamwork was exceptional. I couldn't have asked for any better. We could have gotten a couple breaks or calls that would have put us in the medal rounds."

A total of nine schools — including American, Duke, George Mason, UMBC, UNC, Virginia Tech, and Virginia — were represented by 100 athletes, making it the largest ACAT event to date for the fourth-year conference.

Out of 17 athletes the Flames and Lady Flames entered in fighting competitions at UNC, 16 earned medals for top-three finishes in their respective belt and weight divisions.

"This was more in line with the style of competition we'll see when we go to (National) Collegiate (Taekwondo Association, NCTA) nationals," Childress said. "If you win, you continue, if you lose, you're eliminated, so you've got to beat the person in front of you if you want to continue."

One of the Flames' highlights of their meet at UNC was freshman Clint Stinchcomb's men's blackbelt middleweight sparring title, though it was bittersweet as he inadvertently knocked out one of his opponents and knocked two teeth out of the mouth of another.

"You never want to see injuries, but Clint is really gifted and very quick and he does hit very hard and landed some really high kicks to head and his opponent turned at just the wrong instant," Childress said. "It was not the intent, but unfortunately, at times, it's just par for the course."

"He had three fights with one fight in between," Childress said. "Then, the gold medal match was immediately after the semifinals, so he fought fairly continuously there, which is more tiring and even more impressive at that level."

The Flames and Lady Flames also had nine competitors in the forms category of poomsae and six brought home medals, including golds by Barke, Creese, and freshman male red belt Thomas Siff.

"This is our first year focusing on poomsae, and we don't have the whole team competing yet, but the ones who did performed great, with three firsts, two seconds (Deaton at green belt and Kim at red belt), and a third (Blevins at green through red belt)," Childress said.

The Flames fall season is now complete but Childress is not about to let his athletes slack off in their training.

"It is important that we keep working, on their technique and kicking drills, even through Christmas break," he said. "They can't afford to backtrack. If they go home and take five weeks off, when they come back, there's no way they're going to get back in conditioning in time for our next tournament, when they have to be prepared to fight three two-minute rounds and as many as four more matches on their way to the championship."