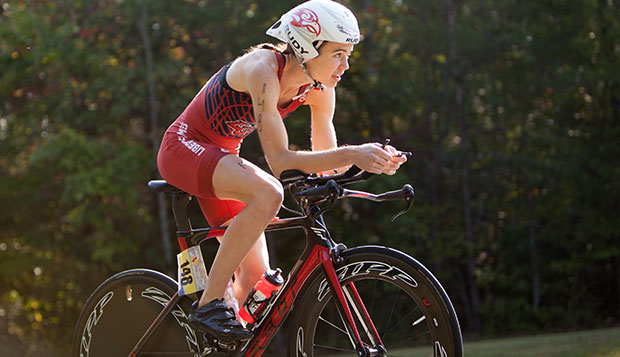 Megan Merryman hopes to get out to a strong swim leg in Friday's race so she can draft off a lead pack in the cycling stage. (Photos by Kevin Manguiob)

The past three seasons have been a whirlwind for Liberty University senior triathlete Megan Merryman, who has made steady strides through the Mid-Atlantic Collegiate Triathlon Conference (MACTC) and national ranks. On Saturday, starting at 2 p.m. (EST), she will reach the pinnacle of her collegiate career when she competes in the NCAA Women's Collegiate Triathlon Draft-Legal Sprint National Championships in New Orleans.

"She has been working very hard, and she's in the best shape of her life right now," Liberty Head Coach Parker Spencer said. "I have no doubt in my mind that she'll go there and perform her best. It's the biggest race of her life."

Merryman enters the race as one of only a dozen triathletes from college club teams in a field of 75 women.

"More NCAA teams are being added each year, so it's harder and harder for a club athlete to get into this race," Spencer said, noting that Merryman qualified by finishing fifth at the North Carolina State Championships draft-legal sprint triathlon, Oct. 2 in Greensboro.

The NCAA course will start with a 750-meter swim in Bayou St. John and continue with a 20-kilometer cycling stage along South Shore Harbor near the University of New Orleans before concluding with a 5K run.

"I was looking at some of the times from the other qualifying races and these girls are fast, very fast," Merryman said. "With it being a draft-legal race, it'll be a little faster, and a lot more competitive, but it will be fun. I'm excited for the whole experience — racing and getting to see New Orleans."

Merryman, has paced the Lady Flames at the past two USA Triathlon Collegiate Championships held in Clemson, S.C., making a quantum leap from finishing 163rd overall as a sophomore to 21st as a junior last spring. She was named Liberty's 2015-16 Club Sports Female Athlete of the Year.

"I need to work on some speed and definitely need to focus on the swim," Merryman said. "That's probably my weakest (phase), and in draft-legal races the swim is one of the most important parts, so you can keep up with everybody on the bike."

Also on Saturday, Spencer, who has competed in triathlon or duathlon world championships the past five summers, will race in the USA Triathlon Draft-Legal Sprint World Championship Qualifier, with the top eight finishers in each age group qualifying for the event held in The Netherlands. Then on Sunday, both Spencer and Merryman will enter the USA Duathlon Draft-Legal Sprint World Championships Qualifier, which features a 5K run, 20K cycling stage, and 2.5K run, to try to advance to Vancouver.

Merryman has Spencer and her fellow Lady Flames to thank for her rapid rise in the sport.

"I'm very blessed to be on this team, to have an awesome coach and awesome teammates," Merryman said. "Parker definitely sets us all up for success with our training plans, and he knows exactly what he's talking about."

Merryman will graduate with a degree in Exercise Science in May. She said her education has coincided directly with her athletic pursuits.

"It's been really fun getting to learn about nutrition and exercise and anatomy, because triathlon and exercise science go hand in hand. So everything I'm learning, I can use and apply to my training," she said.

Merryman plans to turn professional after her career with the Lady Flames officially ends with her third USA Triathlon Collegiate National Championships in late April in Tuscaloosa, Ala.. She is hopeful that the Olympics could be in her future.