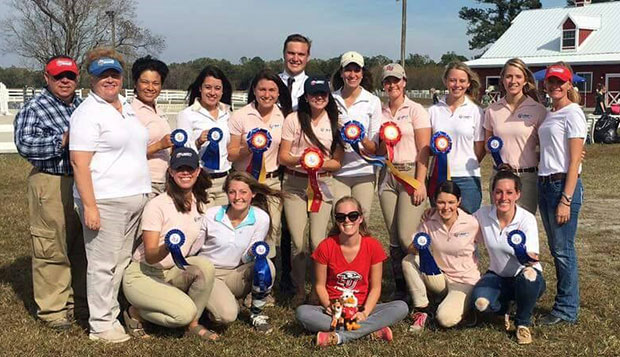 Liberty riders wore pink jerseys over the weekend in honor of Longwood Coach KC Meadows, who is battling breast cancer.

Liberty University's women's Hunter Seat equestrian team had a blue-ribbon weekend at two Intercollegiate Horse Show Association (IHSA) Zone 4, Region 4 events hosted by the College of William & Mary in Williamsburg, Va. The Lady Flames set yet another team record with 42 points in Saturday's first day of competition before the winning their fourth show in a row with 38 points on Sunday's second day, extending their season points lead on defending champion Mary Washington to 30 points at the season's midpoint.

Entering the weekend with a slim five-point lead over the Eagles, Liberty made an emphatic statement with its 20-point win over Mary Washington, receiving blue ribbons from junior Anna Davidson, freshman Bailey Boan, freshman Amber Gayheart, sophomore Kendall Burdette, and senior Liz Chenelle, who won a ride-off to claim Reserve Champion rider award for the day.

Liberty celebrated another first-time team accomplishment when it captured both Champion Rider and Reserve Champion Rider awards for the show, from Chenelle, who won blue and red ribbons on the day, and Gayheart, who earned a blue and a yellow.

Chenelle also leads the regional "Cacchione Cup" race for high-point rider in the region, which would earn her a "bye" straight through to IHSA National Championships in the spring if she can clinch it. Liberty has never had a rider compete at nationals.

As the first-place team in the region, Liberty has earned an invitation to the prestigious "Holiday Tournament of Champions," set for Dec. 3-4 at Ohio University. The Tournament of Champions series is reserved for only the top tier teams in collegiate riding. In its first Tournament of Champion appearance, the Preseason Classic hosted by Goucher College in Baltimore in mid-September, the Lady Flames gained respect by placing in the top half of a field featuring last year's champions, receiving a ribbon.

The Lady Flames will be back in action on two fronts this weekend, with the Hunter Seat team visiting Old Dominion and the Western team competing at Martin Community College in an event co-hosted by North Carolina State.