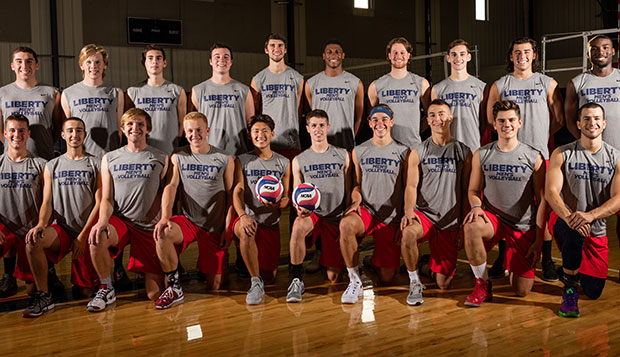 "It was good to even it out and win that last game against Coker, which was the best team there," Liberty Head Coach Bryan Rigg said. "They're probably the best Division II team we've ever played. They've got some really big guys. After beating us in the first set, for us to show the fortitude to come back was encouraging."

Rigg said the Flames' primary setter, sophomore Kaden Knepper, ran their offense through the middle successfully, even against tallerer opponents.

"Overall, our middle hitters (sophomores Brady Quakenbush and Jacob Holbert) did a good job with their hitting throughout the day, which opened up other things for us offensively," Rigg said. "Our setter, Kaden, distributed the ball and ran the offense very well."

He said junior right-side hitter Scott Zalizniak had three solo blocks blocks and two big kills in the last game against Coker, one on game point.

"It was a big day for him," Rigg said. "Our two liberos passed pretty well, especially Sam Wyman with his serve receive and defense, while our outside hitters, (juniors Gene DeJesus and TJ Forsythe) did a good job with their service-receive passing."

Liberty's Division II team lost all three of its matches against Coker, Lincoln Memorial, and King, but they were all competitive. Daniel Koloff and Sam Hess led the Flames in passing and hitting while setter Eli Plasterer provided excellent floor leadership and Jared Patterson played solidly at the libero position, making several excellent digs to help keep Liberty in contention.

Next Friday through Sunday, the Flames' Division I and Division II squads will travel to Michigan State to participate in the Hardwood Classic, which will include 30 of the best DI teams and 32 of the top DII clubs in the United States. Liberty's showings will go a long way toward determining their rankings in the NCVF preseason polls.

"Today's tournament was a good day of preparation for the Hardwood Classic, where there'll be a really good group of club teams, mostly from the Midwest," Rigg said. "I hope we can play with the top teams in our pools and take our best shot at teams like Wisconsin, Air Force, and Ohio State."

He projects the Flames' DI team to be just outside of the top 20 at this stage of the season.

"Our team this year is a step or two better than last year," Rigg said. "We're smaller, but harder-working and have better chemistry."