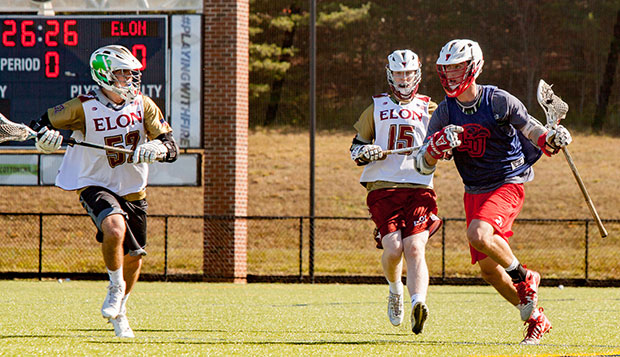 The future of Liberty University's men's lacrosse was on display during Saturday afternoon's Fall Tournament and the Flames showed some firepower, netting 11-2 and 9-4 wins over Elon, which moved up to Division I last year, and SELC Northwest Region rival George Washington, respectively, in the last two 50-minute scrimmages of the day at the Liberty Lacrosse Field.

"It's Fall Ball and you don't want to put too much weight on it, but we've been practicing and playing against ourselves for the past month, so getting somebody new and a different look was a good thing," Flames Head Coach Kyle McQuillan said. "Obviously, we've got a lot of stuff to work on and need to correct some things both on the offensive and defensive sides of the ball, but that's why you do these things. The expectations shouldn't be that we come out and everything is perfect, so to be a little frustrated with the way we played is a little bit normal seeing how early it is in the year for our team."

Nearly half of Liberty's 30-man roster is made up of freshmen, with another third sophomores, so the Flames definitely have plenty of room for improvement.

"I'm trying not to lean on that as too much as a crutch, to say that we're young, because we're going to play a lot of really good teams this year and they don't really care if we've got 14 freshmen," McQuillan said. "Today was a good opportunity to see what we've got. We learned some things and set some lines based on some of the things we saw today. It's just part of the process, something we needed to do, and it was a productive afternoon to say the least."

He was pleased with the offensive spark provided by midfielder Nick Lombardozzi and attack Sam Gregory, both juniors, and will look for underclassmen to emerge as leaders at every position.

Liberty's conditioning gave it an edge on the competition, on a surprisingly warm late-October afternoon, and its depth will be a factor in its favor next spring and into the foreseeable future.

"We've got the roster to be able to win an SELC championship," McQuillan said. "We've got the team able to beat any team on our schedule this year. It just depends on if, as a coaching staff, we can put all the pieces together and if, as a team, they can produce on the field."

The Flames will conclude their short fall competitive season with a scrimmage against Virginia Tech on Friday night at home before hosting a Navy-White scrimmage on Nov. 11 and a Fall Recruiting Showcase/Combine on Nov. 12.

"Next week is definitely going to be the barometer for fall ball of where we were able to get this team to, and an indication of where we're going," McQuillan said. "We'd like to set the bar pretty high and win against Virginia Tech on Friday would help us to do that."

McQuillan and his coaching staff and players will spend this week reviewing film from Saturday's tournament to see and show the team areas it needs to make the most improvements going into Friday's showdown with the Hokies.

"Virginia Tech is going to be a really good test because they're consistently a very good program. They make you pay for not playing well and making mistakes," McQuillan said. "To play a team like Virginia Tech, the emotions that are involved in that and the rivalry that exists, you get to test these guys on so many different levels — on the field, emotionally, physically, spiritually — all those things kind of come into play."