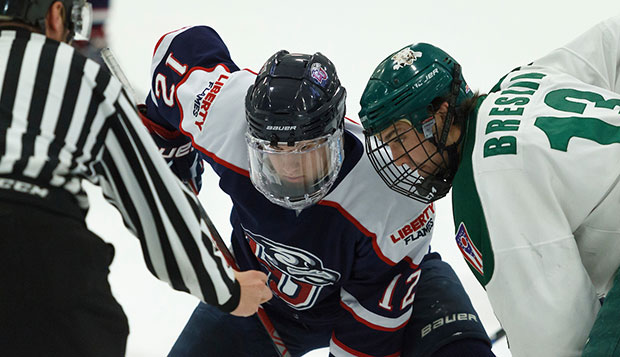 Saturday night's rematch between Liberty University's ACHA Division I men's hockey team and fifth-ranked Ohio didn't start or end well for the Flames, who suffered a 6-1 setback at the LaHaye Ice Center.

The Bobcats (10-1-1) needed less than a minute to get on the scoreboard when forward Matt Rudin intercepted a Flames' pass inside the blue line and skated into the right circle before lifting a wrist shot into the top right corner of the net, past a defenseless goalie, senior Matt Pinel.

"We made some mistakes the past couple weekends and didn't have them end up in the back of our net like they did tonight," Liberty Head Coach Kirk Handy said. "The reason why we play teams like Ohio is we know that it will improve us as a team. It's a different level and it's good for our guys to find that turnovers are important and making strong plays are important. For 90 minutes this weekend — 60 last night and 30 tonight — we obviously made some mistakes, some soft plays, and they were able to take advantage of them."

The 16th-ranked Flames (8-3-0) were more than doubled in shots for the second straight night (31-14) and dropped back-to-back games for the first time this season, losing their ninth meeting in a row against the Bobcats.

Rudin struck again with 4:31 remaining in the first period, depositing a rebound into the back of the net to give Ohio a 2-0 advantage after Liberty couldn't clear the rebound of Liam Geither's initial shot stopped by Pinel. Then, with 54 seconds left in the first period and the Flames up a man up, Rudin sent a fadeaway, cross-crease pass from the right corner to fellow forward Austin Heakins stationed near the left post. He lifted a chip shot past Pinel top shelf, giving the Bobcats a 3-0 lead going into the first intermission for the second night in a row.

"That was probably the tipping point," Handy said of the Bobcats' shorthanded goal.

With 13:54 left in the second period and Ohio on the power play, Matthew Hartman cleaned up the rebound of a shot from the point off the stick of Jacob Houston by slamming the putback past Pinel from deep in the right crease for a commanding 4-0 advantage.

Just over a minute later, the Bobcats executed on a fast break to stretch their lead to 5-0 when Rudin set up a shot from the right slot by defenseman Grant Hazel before Gianni Evangelisti snuck the rebound past Pinel from near the right post.

That prompted Liberty to change goalies, with sophomore Blake Scott coming on in relief of Pinel and shutting down the Bobcats for the rest of the period.

"We wanted to try to refocus our guys and we pulled Matt and put in Blake and felt like from that point on, we played pretty well," Handy said. "It's about us learning, about us sticking to the process and not letting it get to be a 10-1 game. I liked our pushback. We had some fight in us and that was to our guys' credit."

With 2:16 left in the second stanza, Liberty ended the shutout by capitalizing on a power-play when freshman defenseman Matt Cruickshank received feeds from freshmen Drew Crilly and Brock Thompson and ripped a shot from near the blue line that freshman forward Andy Clark tipped past Ohio goalie Jimmy Thomas for his first goal as a member of the Flames.

"Some of the younger guys really stepped up and played hard tonight — Jake Fricks on defense, Josh Hamilton had a heckuva game up front, and Andy Clarke came back tonight and had some spark out there for us," Handy said.

The Flames applied some of their strongest pressure of the night during back-to-back power plays midway through the third period, but came away emptyhanded and the score remained unchanged until the Bobcats put away a fast-break chance in the closing two minutes when Mike Palasics finished a short feed from Tyler Harkins in the left slot.

Ohio, which has had 22 different goal-scorers on the season, got goals from five players Saturday after four Bobcats scored in a 4-1 opening win on Friday.

"We had our chances on the power play, but we didn't generate a whole lot (even strength)," Handy said. "We got outscored 10-2 (for the two nights), but it'll make us a better team when we play Stony Brook and Delaware and Davenport the next three weekends."

Next Friday's and Saturday's games against the Seawolves, set for 7 p.m. at LaHaye on both nights, could give the winner the inside track to the ESCHL regular-season title and ACHA Division I National Championships autobid.

"This is just a bump in the road and we're going to be prepped and ready to go next weekend," Handy said. "Stony Brook's a conference game and it's huge. There's a nice core of guys in there, a good group and we're looking forward to next weekend and seeing our guys ready to go."