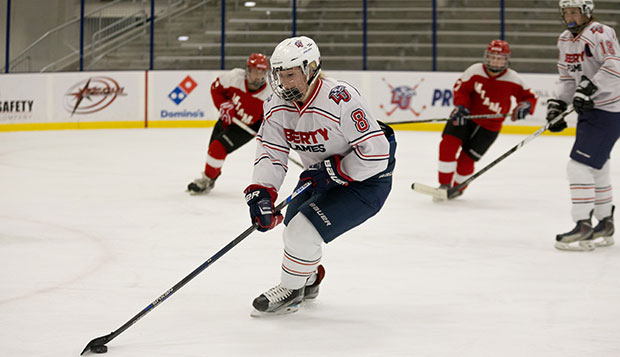 The Lady Flames (2-2, whose two losses came at the hands of Miami of Ohio, Oct. 8-9 at home) remained undefeated against the Red Hawks (0-3) over the past three seasons (5-0), getting balanced offensive production and excellent goalkeeping from senior Emily Thomas.

"The team played hard and everyone contributed to our offensive scoring," Liberty Head Coach Sarah Niemi said. "We really have been focusing on patience and getting shots on the net, which paid off in a big way this past weekend. Our team worked very well together and continued to play hard until the end of each game."

Ashley Wright and Richards scored back-to-back goals to give Liberty a 2-1 edge after the first period of Sunday' rematch after Mikhaela Schultz had given Montclair State an early 1-0 advantage. The second period featured six goals, the first two by Leah Wright and Richards before Brittany Meneghin cut the Lady Flames' lead to 4-2. Pillisch and Hoberg netted goals within 21 seconds of one another before Paula Bush responded for the Red Hawks. Gerber and Zejdlik capped the scoring with goals early and late in the third.

"I did move a few players around to different positions to match up to Montclair's speed and also due to injuries that we had faced over the previous week," Niemi said. "This sweep gives us great momentum going into our series with Delaware this weekend. We will need to be more defensive-minded to make for tight games."

Thomas, who made 63 saves over the weekend including 48 in Sunday's second game, will likely be more severely tested this weekend. The Blue Hens (5-1-1) are one of the favorites to capture the College Hockey East (CHE) title this season along with Buffalo (5-0-1), the next team the Lady Flames host on Dec. 3-4 after traveling to Little Falls, N.J., for a rematch with the Red Hawks on Nov. 12-13. The puck drops for this weekend's games against Delaware at 10 p.m. Saturday and 11 a.m. Sunday.