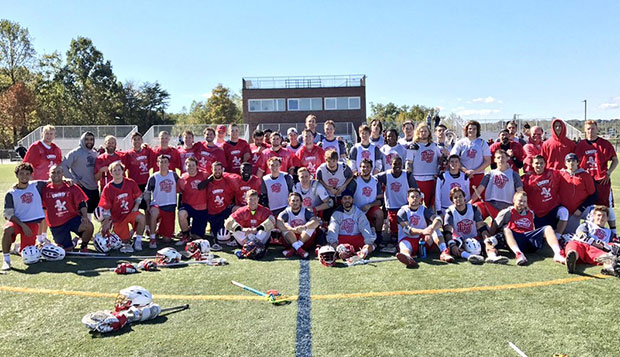 Current Flames players joined with alumni for a group photo after Saturday's two games at the Liberty Lacrosse Fields.

"We're trying to keep it new and unique for alumni able to make it back on campus," Liberty Head Coach Kyle McQuillan said. "It was beautiful weather, a great day of Homecoming, and most of the alumni players stayed pretty healthy. At the end of the day, it was an opportunity for our current players to build relationships with young alumni."

This was the first year Liberty held two separate alumni games — the first featuring all 35 alumni players who turned out from Flames teams dating as far back as the 1980s, and the second pitting recent graduates against the current team.

"The all-alumni game was a more relaxed atmosphere, with the focus to allow some of the older generation to play, before the second game had a little more competitive spirit," said McQuillan, who let the alumni players coach themselves. "We usually give two points for each alumni goal, but based on the level of talent our alumni have — with guys like Ryan Miller, Brett Bernardo, Bryce Mrakovich, and Chris Armstrong coming back — we kept it even because we wanted it to be a little more fair."

The current Flames could have afforded to play with the handicap as they wound up winning, 12-4.

"Our guys are a little younger and have practiced multiple times per week, so they had an advantage," McQuillan said.

Liberty will host its annual Fall Tournament this Saturday, with hour-long scrimmages against High Point at 10 a.m., MCLA SouthEastern Lacrosse Conference Division I Northwest Region opponent George Washington at 1 p.m., and Elon at 3 p.m. GWU will play Elon at 11 a.m., Elon will face High Point at 1 p.m., and High Point will take on GWU at 2 p.m.

"It's quite a bit of lacrosse all packed into one day," McQuillan said. "This weekend's games will be a good opportunity to see our very young team play in live action. It will be a learning opportunity for our staff to see if what we're coaching has been effective and is working of if we need to make some changes."

On Nov. 4, the Flames will host their much anticipated showdown with Northwest Region rival Virginia Tech, which has decided the regular-season champion the past three springs.

"We're looking forward to facing Virginia Tech, which will be a good test and barometer for our team," McQuillan said.