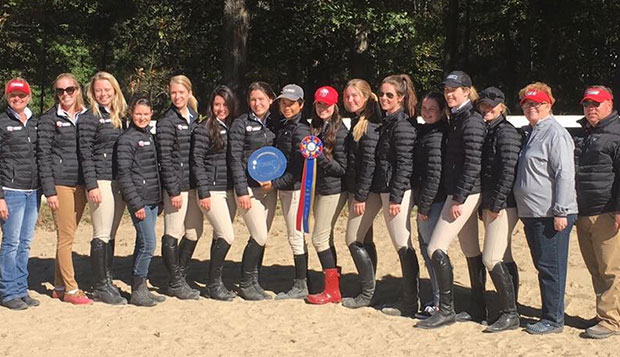 Coming off last month's Intercollegiate Horse Shows Association (IHSA) victory at the University of Richmond, Liberty University's women's Hunter Seat equestrian team traveled back to the capital city over the weekend to compete at a second regular-season show hosted by Virginia Commonwealth University.

The Lady Flames came away with their second straight team triumph over Mary Washington, the defending Region 4 champion. Liberty scored 39 points, its highest point total in the program's brief history, to barely clear the Eagles (38 points) from Fredericksburg and Randolph-Macon (37) from nearby Ashland.

Liberty was led by senior team captain Liz Chenelle and sophomore team captain Zoe Lepke, who both earned blue ribbons in open fences and red ribbons on the flat.

"Everyone rode great … and we all pulled together," Liberty Head Coach Jim Arrigon said. "We've really worked on eliminating nerves and mistakes that go with getting too keyed up and we're only getting better. All the teams are improving, but we're getting better quicker than they are."

The Lady Flames will be back in action this weekend, traveling to compete in Saturday and Sunday shows hosted by William & Mary in Williamsburg, Va., before returning to the Tidewater area to ride in an event hosted by Old Dominion and Christopher Newport University in Newport News on Nov. 5. That same day, Liberty's women's Western team will compete at Martin Community College in a show hosted by North Carolina State in Williamston, N.C.