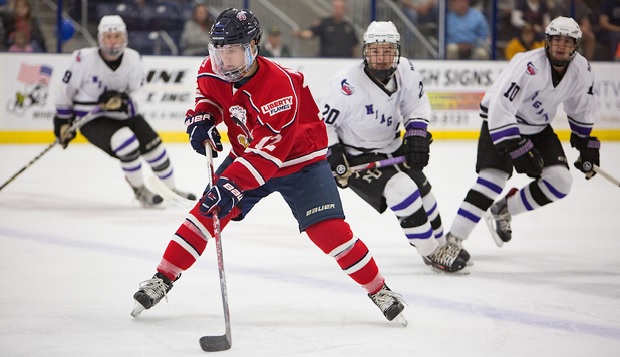 Flames sophomore forward Owen Harris leads a trail of Purple Eagles with the puck in the LaHaye Ice Center.

Liberty University's ACHA Division I men's hockey team extended its winning streak to five games in front of a Homecoming Weekend crowd, applying a solid defensive effort in a physical non-conference bout with Niagara, Saturday night at the LaHaye Ice Center. The Flames (8-1) outshot the Purple Eagles (2-7) by a 54-20 margin and sealed the series sweep with an empty-net goal in the final minute for a 4-2 triumph.

"It was a solid defensive effort and a huge night for us," Liberty Head Coach Kirk Handy said. "We had a lot of regulars out and a couple guys injured and we really had some unsung heroes. As a defensive unit, we moved the puck well tonight, which was a big difference for us."

Sophomore goalie Blake Scott made 18 saves and improved to 3-1 in his fourth start.

The Flames got on the scoreboard first with just 0.4 seconds left in the first period when freshman forward Quinn Ryan corralled the rebound of a shot from the high slot taken by senior defenseman Ben Hughes behind the net and sent a pass to sophomore defenseman Zane Schartz on the outside edge of the right circle. In one fluid motion, Schartz controlled the puck and unleashed a wrist shot that slipped between Niagara goalie Mike Parda and the right post before time expired.

The Purple Eagles netted the equalizer just over two minutes into the second period when forward Andrew Mitch, who scored twice on Friday night, skipped an assist from the right end line over the stick of Liberty freshman defenseman Matt Cruickshank to Niagara forward Dalton Bew, who one-timed a shot from out front over the shoulder of Liberty sophomore goalie Blake Scott into the top right corner of the net.

Less than six minutes later, the Flames reclaimed the lead when freshman forward Josh Hamilton, who scored his first goal for Liberty on Friday night, battled for puck possession behind the Purple Eagles' cage and sent a short pass to a cutting sophomore defenseman Drew Crilly, who pocketed his first goal as a Flame into the top right corner.

"Josh Hamilton won some big faceoffs and killed some penalties for us tonight," Handy said. "He played well for us. That line of (sophomore forward Marshal) King, Hamilton, and (sophomore forward Zak) Hayes had a strong game for us."

Three and a half minutes after that, Liberty capitalized on a power play with some excellent passing around the perimeter. Cruickshank sent the puck from left to right along the blue line to freshman forward Garrett Nelson, who spotted sophomore forward Colt Steele cutting into the left crease where he finished the feed with authority, lifting his shot top shelf for a 3-1 advantage.

"It was a fantastic shot by Colt," Handy said of Steele, who had his third two-point night in the past four games to move into the team lead with seven goals scored and a tie with Cruickshank for fifth in points with 10.

The Flames have converted on 35 percent of their power play opportunities this season, one of the best rates in the ACHA.

Niagara drew back within 3-2 with 1:48 remaining in the second period when Bew blew past three Flames defenders in the left circle and stuck the puck past Scott in the five hole. But the Purple Eagles were unable to retie the contest in the third and pulled Parda for the final minute, a move that backfired when senior forward Chase Harris received a pass from Steele in the right circle and maneuvered the puck around a sliding Niagara defenseman before clinching the win with a sharp-angled shot into the open net with 48 seconds remaining in regulation.

"Owen Harris's line has been solid for us the last two games and they had another big night tonight," Handy said. "It was kind of rewarding for Chase to score that last goal. I thought Chase had his best game of the year for us tonight as well."

The second straight series sweep sets the Flames up for their next three weekend home series against fourth-ranked Ohio, sixth-ranked Stony Brook, and 12th-ranked Delaware, before they travel to No. 3 Davenport.

Liberty is 4-0 in its first season of Eastern States Collegiate Hockey League (ESCHL) play, tied for first with Delaware (10-1), which swept Rhode Island over the weekend, and ahead of Stony Brook, which was swept by Rutgers.

"It's interesting with the conference," Handy said. "Anyone can win on any given night. The goal with a young team is to continue to progress and I really felt this weekend we really progressed as a team, which was awesome."