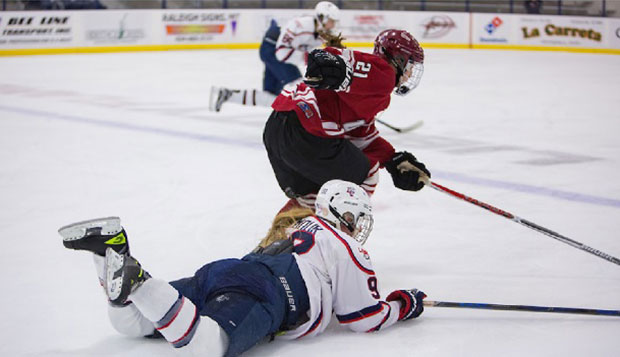 Defense dominated this weekend's series between Liberty University's ACHA Division I women's hockey team, the No. 3 team in the ACHA DI rankings, and second-ranked Massachusetts at the LaHaye Ice Center.

Both teams bolstered their lineups in the offseason, developing depth on the bench and improving their overall talent levels.

"They're a lot stronger than they have been, they're quick and ambitious, and they want it," Liberty Head Coach Paul Bloomfield said of UMass. "It's going to be a good rivalry throughout the year. I'm glad our girls were able to dig deep and get the win."

Liberty started the scoring just three-and-a-half minutes into the action when junior forward C.J. Tipping intercepted a pass at the red line along the left boards and skated through the left circle to the end line before cutting the puck back to graduate forward Catharine Burrell for a one-time, top-shelf chip shot over UMass goalie Amber Greene. It was Burrell's fifth goal and Tipping's fifth assist on the season.

Less than five minutes into the second period, Lady Flames senior forward and head captain Carrie Jickling cut through the right crease and received a beautiful cross-ice pass from senior forward Courtney Gilmour for a point-blank finish in the top right corner of the cage.

"It was a really aggressive game today and really hard to do anything offensively, but some nice goals were scored by Carrie Jickling and Catharine Burrell," sophomore forward Lauren McDonald said. "All three of them, Carrie and Court and Cat, are a really solid line, and in our games against good teams like UMass, they'll always get us ahead and score our goals for us."

The Minutewomen responded 27 seconds later to trim Liberty's lead to 2-1. Olivia Knight slammed home a one-timed putback in the right crease off a shot from defenseman Amy Morin in the left circle..

Liberty freshman goalie Nadia Rupoli, who ranks third in the ACHA with a 0.80 goals-against average and a 96.3 save percentage, stood on her head for Liberty, allowing just two goals in two games as the Lady Flames went 10-for-10 on penalty kills. Rupoli won the showdown with Greene (0.90 GAA, a 95.8 SP, three shutouts in six starts).

"We had a lot of confidence in the way she played last night, so we put her back in today," Bloomfield said. "She just wants to be competitive, and that's what it takes. It's that extra effort to get it done."

After killing two penalties at the end of the second period and two more early in the third, the Lady Flames iced the win on McDonald's empty netter on a power play with 27 seconds remaining in regulation. Freshman forward Mackenzie Carroll won a faceoff at the high point to McDonald along the right boards where she threaded a backhanded shot between two UMass defenders into the open cage.

"We didn't want overtime today," Bloomfield said. "We wanted to finish it this time, and it was good to get the empty-netter at the end."

Liberty outshot UMass 41-34 and improved to 5-1-1 in ACHA play (5-4-1 overall), evening its season series with the Minutewomen (7-1-1) at 1-1-1 with the victory and making a case for trading places with UMass when the second computer ranking comes out next week.

"We're still making mistakes, but I think we're climbing the ladder and the longer we play with each other and get used to each other and communicate with each other, the stronger we're going to get," Bloomfield said. "Obviously, the lines that were in place last year are producing, and it's just that experience of working together."

Liberty has next weekend off before traveling back to Amherst, Mass., for a tournament hosted by UMass. The Lady Flames won't meet the Minutewomen, but three Michigan schools — No. 6 Grand Valley, No. 9 Michigan, and No. 7 Michigan State — before traveling to Michigan before Thanksgiving to face Davenport Nov. 18 and Adrian on Nov. 19-20. 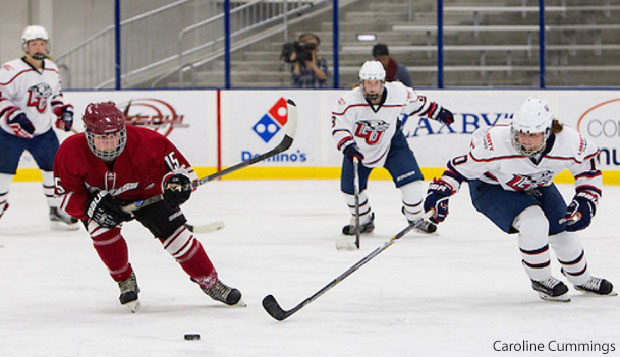