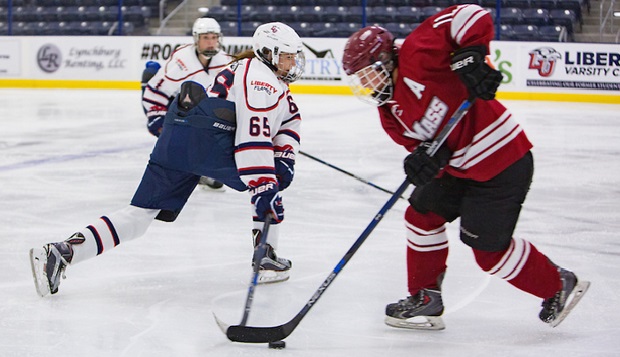 A showdown between the third-ranked Liberty University ACHA Division I women's hockey team and second-ranked Massachusetts lived up to its billing late Friday night, as the two teams dueled into overtime before settling for a 1-1 tie at the LaHaye Ice Center.

Liberty graduate forward and head captain Carrie Jickling lifted the Lady Flames to a 1-0 lead late in the second period when she stole the puck at the red line from UMass defenseman Tatum Schulz and went in for a breakaway with Minutewomen goalie Amber Greene, who entered the game with a 1.00 goals-against average, a 95.2 save percentage, and three shutouts in five starts.

Jickling moved into a tie with Joanna Olson for second place among ACHA points leaders, behind only fellow UMass sophomore forward Brittani Lanzilli's 14 points, with her league-leading 10th goal of the season on a putback of her own blocked shot.

After lifting a wrist shot into the collar of Greene, Jickling was in the right place at the right time when Schulz tried to clear the rebound out of the crease. The stray puck ricocheted off the skate of UMass forward Kelly Dolan right back to Jickling left of the cage, where she wrapped it around the left post for a 1-0 lead with 4:16 left in the second stanza.

Liberty, which ranks second to UMass in power play scoring percentage, killed a penalty in the closing minutes of the second period and appeared on the verge of putting away a 1-0 win before the Minutewomen evened the score seconds after extinguishing a Lady Flames power play.

Both UMass and Liberty had power play opportunities late in the third period and at the beginning of the five-minute overtime, but could not capitalize, resulting in the tie.

They will face off again Saturday afternoon at 2:45 p.m. in the series finale.