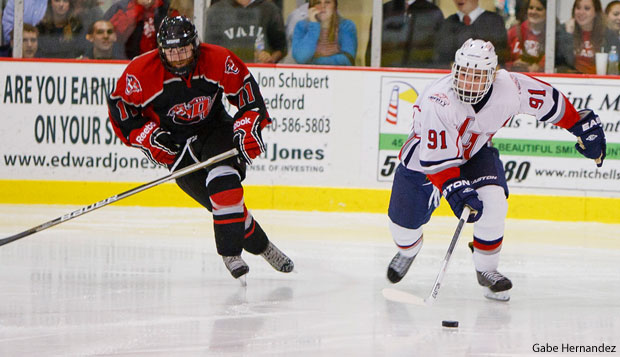 A second period deficit proved to be too much for the Liberty Flames Division I men's hockey team as it fell to the Davenport Panthers 6-3 Friday night in the LaHaye Ice Center.

Cody Walsh got the visitors on the board first six minutes into the game with a shot from the point. Freshman BJ Pirus scored late in the first for Liberty on a breakaway to knot the score at 1 in front of a capacity crowd at the Ice Center for Parents Weekend.

Mason Bohlinger gave Davenport the lead for good early in the second, as the Panthers converted the first power play goal of the night. Two minutes later, Phil Wendecker picked up his fifth goal of the season on a shorthanded opportunity to up the lead to 3-1. Stephen Flood increased the Davenport lead to 4-1 with about four minutes to go.

The Flames gained some life as Rick Turner notched his nation leading 19th goal of the season off a Steven Bellew assist to cut the deficit to 4-2.

Robert Kleiman restored the three-goal advantage early in the third period on a controversial goal, as the Flames' net appeared to be off its moorings.

Bellew brought Liberty back within a pair of goals as Turner returned the favor from his goal in the second. Kleiman scored on an empty net with a minute remaining to close the scoring and give the Panthers a 1-0 lead in the battle for the "Blue and Gray Cup."

Phil Graveline made 34 saves for Davenport toearn the victory. Clayton Brown took the loss for Liberty despite making 25 saves.

The two teams will conclude the two game series Saturday night at 7 p.m.