No. 3 Lady Flames fend off No. 9 Wolverines for home sweep 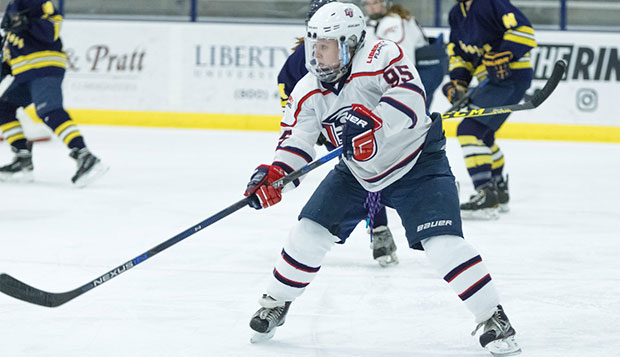 Liberty University ACHA Division I women's hockey graduate forward Carrie Jickling moved into the league's scoring lead with her seventh, eighth, and ninth goals of the season to help the third-ranked Lady Flames double up No. 9 Michigan, 8-4, and complete the series sweep, Saturday night at the LaHaye Ice Center.

Jickling, who eclipsed the 200-goal mark for her career early in the season, completed a hat trick with the first and last goals of the third period to raise her career total to 208.

"She's climbing up the ranks," Liberty Head Coach Paul Bloomfield said, noting that Jickling is closing in on the ACHA's all-time scoring mark of 219 goals, which has stood for several seasons.

The Lady Flames also got a second short-handed goal in as many nights by sophomore forward Lauren McDonald, who dug the puck away from a Michigan defender against the back boards and snuck a wraparound shot past Michigan goalie Bailey Hamill from near the right post for a 1-0 lead just over three minutes after the opening faceoff.

"Nobody can catch her," Bloomfield said.

In a more even matchup than Friday's first game, the Lady Flames only outshot the Wolverines by a 45-42 margin but were called for twice as many penalties (eight) as Michigan and gave up three power-play goals.

"We've got to stay out of the penalty box," Bloomfield said. "That's way too many penalties."

Wolverines defenseman Sarah Girard evened the score on a man advantage with 4:39 left in the period before Liberty answered with a power-play goal of its own in the final 12 seconds of the period when C.J. Tipping set up fellow junior forward Chelsey Greenwood for a shot from the left wing. The puck bounced off of Hamill right to senior forward Courtney Gilmour in the right crease, where she finished to give the Lady Flames a 2-1 lead they would not relinquish.

"That gave us a little momentum," Bloomfield said. "Gilmour's one that doesn't get a lot of recognition, but she works hard all the time. She's always digging in there."

Jickling netted her first goal two minutes into the second period after taking a beautiful outlet pass up the middle of the ice, skating past a defenseman, and lifting a left-handed wrist shot from the left circle into the top-right corner of the cage. However, just over a minute later, Girard stole a clearing pass and finished top-shelf to make it a 3-2 contest.

Liberty killed a five-on-three penalty midway through the second period before capitalizing on consecutive power-play goals in the closing minutes. Greenwood, stationed at the right post, put away a short pass from behind the cage by McDonald before Deena Birney converted off an assist from fellow freshman forward Vanessa DeMerchant to pad the Lady Flames' lead to 5-2.

"Birney's a strong girl has really stepped up and filled (former forward Nikki McCombe's) shoes, and she's getting some goals, too," Bloomfield said. "So we're seeing some talent from our incoming freshmen. People are settling into their roles and the next two or three games are going to be more confirmation and people feeling comfortable in their shoes."

Jickling rung a fast-break wrist shot from the right circle off both posts and the crossbar to stretch Liberty's advantage to 6-2 unassisted before freshman forward Shelby Burden netted her second goal in as many nights less than a minute later, deflecting in a slap shot taken from the point by sophomore defenseman Katie Comeau.

"That was a great shot and Burden just touched it in," Bloomfield said. "It was perfect."

"The end of both periods, we really got momentum and then in the third period, we really lost momentum at the end," Bloomfield said. "We were killing some penalties, and this team, for some reason, always seems to play up to our level."

The series sweep should put Liberty in position to move back in front of Massachusetts when it visits Liberty for a Homecoming Weekend clash next Friday at 9:45 p.m., with a quick turnaround before Saturday's 2:45 p.m. rematch.

"This will help us because this is a top-10 team," Bloomfield said. "These teams want us because we're kind of at the top. Everybody digs hard to get to us. We've just got to look after business next week."

UMass moved in front of the Lady Flames and trails only defending national champion Miami of Ohio in the ACHA DI rankings after edging Liberty 5-4 last Saturday in Amherst, Mass. The Lady Flames will be eager to turn the tables on the Minutewomen.

"It's going to be a big, physical battle," Jickling said. "When we played them last weekend, we weren't really on top of our game. We had lack of sleep, a long bus trip, we were definitely not playing to our full potential. So I think we're going to give them a pretty good run for their money." 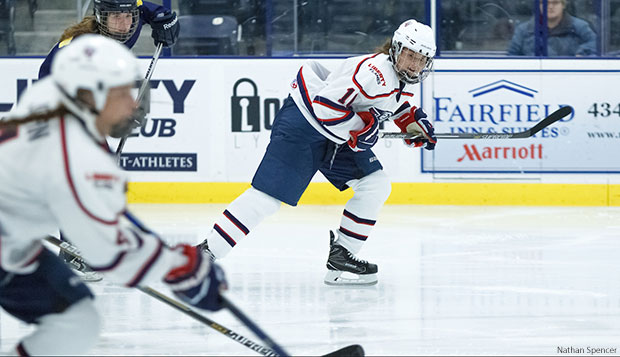