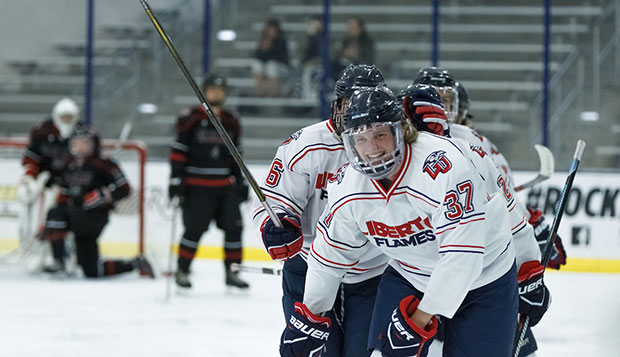 Flames' freshman forward Victor Blomberg leads the line in celebration of one of his three goals in Friday night's 14-0 rout.

"We wanted to make sure we established a good lead, especially now that we've gone to computer rankings, and the goal differential really helps us," Liberty Assistant Coach Mike Morrison said.

Docksteader scored the last goal against Rider off an assist from senior linemate Ben Freymond, who worked his way through traffic from behind the right side of the cage and sent a short pass across the crease.

"That was a great play," Morrison said. "Bennie was battling behind the net, trying to create space, Dock was crashing hard to the net and Bennie made a great pass, tape to tape, and Dock was able to put it in."

Graduate forward Danny Logan gave the Flames a 3-1 lead in the final 18 seconds of the second period with a one-timed rocket of a slapshot from the point off a power-play assist from junior forward Robert Ward.

Lamoureux set up another power-play goal midway through the third period with a pass to senior defenseman Daniel Huntington. Huntington sent the puck out to Tyson Street who found fellow graduate forward Peter Kazmierczak posting up in the left crease, where he pivoted for a backhanded shot off the pads of Rider goalie C.J. Lineman before controlling the rebound for a forehand finish inside the left post

"That was a beautiful play," Morrison said of Kazmierczak's goal that stretched Liberty's lead to 4-1.

The Flames capitalized on their first power play with 3:26 left in the first period before killing a five-minute penalty while clinging to a 2-1 lead early in the second.

Moments after taking a high stick to the chin in the left crease, drawing a penalty from defenseman Maxwell Daley, Liberty junior forward Tim Bierema didn't shy away from traffic in front of the Broncs' cage. He nearly converted a putback of a shot by Ward despite contact in the left of the goalmouth before tipping in Logan's slap shot from the right blue line off a cross-ice assist from Ward.

A minute and a half later, Docksteader assisted Huntington's slap shot from near the left blue line that found the left side of the net, extending the Flames' lead to 2-0.

"That's something we talked about between periods, keeping shots low, looking for rebounds and deflections," Morrison said. "We just wanted to spread the ice out, create space for ourselves, and hopefully get some shots on net. The guys responded well and we were able to get some goals."

Rider got one goal back when forward John Martino redirected a shot from the high slot taken by Daley past Liberty freshman goalie Clayton Pierce. As freshman teammate Nathan Price did on Friday night, Pierce pitched a shutout the rest of the way.

But he and his defense had to kill off a five-minute penalty moments later and then a second two-minute penalty assessed to Freymond, preserving the 2-1 lead before Logan's slap shot at the end of the period.

"That's a tough one, to go down and especially kill a five-minute penalty is huge," Morrison said. "That's a momentum shift on our side. It was a good, competitive game, and a league game. They've beaten some good teams, including Virginia Tech last night."

The Flames opened their season with a 7-3 triumph over the Hokies, Sept. 23 at home. They will travel to Delaware next Friday at 6:20 p.m. and UMBC next Saturday at 4:30 p.m. on their first road trip. 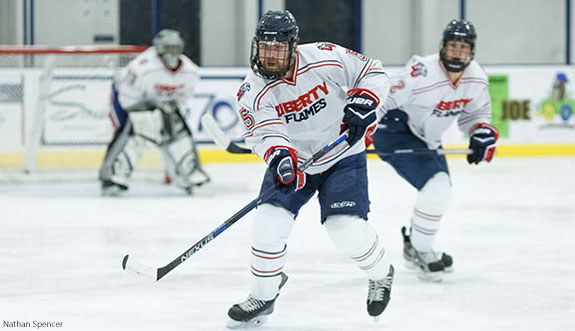