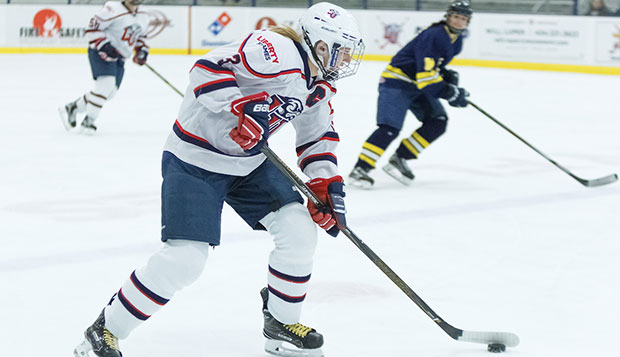 Veteran forwards on Liberty University's ACHA Division I women's hockey team netted three goals in the final 10 minutes of the second period to help the third-ranked Lady Flames skate to a 6-1 victory over ninth-ranked Michigan, Friday night at the LaHaye Ice Center.

Liberty, which went undefeated at home last season, improved to 3-1 in league play (3-4 overall) by notching its first win in four tries at LaHaye in its ACHA home opener.

The Lady Flames also got a solid performance in goal from freshman Nadia Rupoli, who made several saves of Wolverine shots on power plays, especially in the first seven minutes in the second period when Liberty killed three consecutive penalties.

"She held her own, tracked the puck really well and basically stood on her head when we were taking penalties that we shouldn't have been," Lady Flames graduate forward and head captain Carrie Jickling said. "It was good to see. We did well on the PK tonight. We've been practicing that a lot. But at the same time, we need to tighten things up defensively so we're not taking those penalties, because the better teams like Miami and UMass will capitalize on those opportunities if we give them to them."

A shorthanded goal by sophomore forward Lauren McDonald midway through the first period sparked the attack as Liberty's fastest player finished a short breakaway set up by junior Chelsey Greenwood by lifting a backhanded shot past Michigan goalie Bailey Hamill in the right crease.

The score remained 1-0 Liberty for nearly 20 minutes before the Lady Flames turned to Jickling, who started a fast break at the blue line and put away a wrist shot from the left crease into the top right corner of the cage.

Just over a minute later, after Michigan was called for icing giving the Lady Flames a faceoff in the offensive end, senior forward Courtney Gilmour received a pass from Jickling and maneuvered around a Wolverine defenseman before deftly sliding the puck from point-blank range through the five hole, as she caught Hamill in the splits.

Michigan got its lone goal on a power play in the final two and a half minutes of the period, trimming the deficit to 3-1 when forward Karrie Inman deflected in defenseman Lia Harrington's shot from the right blue line. But Liberty responded less than a minute and a half later to take a 4-1 lead into the second intermission on a shot from just inside the blue line by junior forward C.J. Tipping that deflected off the pad of Hamill into the top right corner of the net.

Two freshmen forwards found the net for the Lady Flames in the third period, the first by Deena Birney five and a half minutes after faceoff. She picked up a loose puck after McDonald cut through traffic in front of the goal and lifted a shot from the left crease into the top left corner.

"It's nice to see everyone scoring and the freshmen coming in big and getting those points so we're not relying on just one or two lines to score," Jickling said. "Deena is a hard worker and crashes the net hard and pound in those dirty goals and I think that's going to pay off for her this year."

Shelby Burden, stationed in the left crease, got her first goal for Liberty and capped the scoring with 8:35 remaining with a one-timed redirection of sophomore Tara Lee's pass from the top of the left circle.

"Shelby's the same type of player, a grinder who goes hard to the net and is able to put the puck in," Jickling said.

The two teams face off again on Saturday at 6 p.m. at LaHaye, when the Lady Flames will look to complete the sweep of the Wolverines (1-1) and raise their overall record to .500.

"Michigan always plays up to us, whether it's regular-season or at nationals so it was nice to get a lead on them and not allow them to score many goals tonight," Jickling said. "Hopefully, we get a good start early and be able to protect the lead and work on things we need to work on."