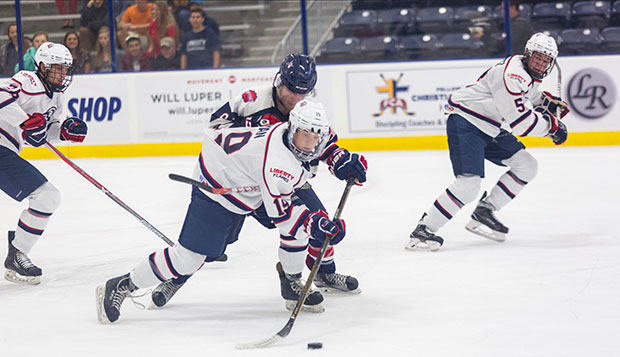 It's been nearly 10 years since Liberty University's ACHA Division I men's hockey team has played Rhode Island, one of its new rivals in the Eastern States Collegiate Hockey League (ESCHL).

The Flames traveled to face the Rams in Brad Boss Arena soon after Rhode Island captured its only ACHA DI National Championship in 2006. That was the same year Liberty advanced to the ACHA DII Final, losing to Oakland (Mich.) in overtime, before moving up to the DI level the following season.

"We played them there twice (after starting the DI team)," Flames Head Coach Kirk Handy said. "Those guys are a strong opponent, and they're going to be a real test for us early in the year. Their rink is right on campus, and it's a great setup. We're excited about it. We have confidence in our guys to go in there and play well."

Ranked No. 17, as it has been for the season's first month, Liberty is one of five of out of six ESCHL teams listed in the fourth ACHA DI top-25 rankings, including the Rams, who debuted at No. 25 this week.

Liberty will leave by bus Thursday at 5:45 a.m. to arrive 24 hours in advance of Friday night's faceoff, in time to participate in a service project in nearby Providence, R.I., on Thursday night. Coming off last weekend's fall break, the Flames are refreshed and ready to return to the ice.

"It was a great opportunity to unwind for a weekend and now to get it going again," Handy said. "We've got a little bit of chemistry there, so it's cool to see how our guys have grown and will continue to gel."

He is pleased with the way the Flames' newcomers have meshed with their returning players to form strong bonds and combinations on the lines and defensive pairings.

"We've had contributions all around and it's been great to see," Handy said. "The 15 new guys we've got is a real special group. They've reacted well to pressure, and I'm excited to see them move forward as a team."

"With what's brought us success so far, we're trying to refine our game and get better as a team every night," he added. "That's our whole goal. We have a really motivated group of men who are improving every night and pushing each other to get better."

Liberty scouting report: The Flames featured an ESCHL "Star of the Week" for the third week in a row after splitting their two-game series against non-conference opponent Alabama on Oct. 1 — sophomore defenseman Zane Schartz, who netted a goal and distributed four assists, three in the rematch with the Frozen Tide, an 11-2 blowout.

In goal, the Flames have platooned senior Matt Pinel (3-0, 1.61 goals-against average, 93.8 save percentage) and sophomore Blake Scott (1-1, 3.98 GAA, 79.6 SP) through the first five contests, with each playing two and a half games between the pipes.

Rhode Island scouting report: The Rams are currently in first place in the ESCHL with five points, one more than Liberty and Stony Brook. Their two blemishes on their record have come against defending ESCHL champion Seawolves, including a second-game 4-3 overtime setback. Rhode Island responded by sweeping West Chester in another league series last weekend.