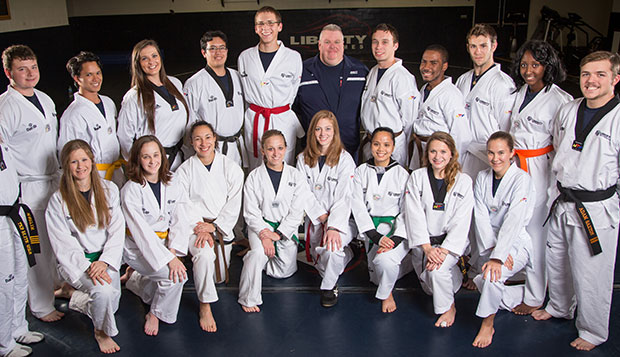 The Flames feature a solid returning corps of 13 student-athletes and an impressive influx of 13 freshmen, providing a solid foundation for the future of the fifth-year program.

"The team looks great as far as their competitiveness and that fire that you're looking for when you train with them," said Childress, who has served on the coaching staff since the club started in 2012. "We have a team that's extremely vested. They're really dedicated, locked in, and look ready to go. The freshmen have that desire and fight in them to push themselves and they're all doing so well right now."

Two junior third-degree black belts, Sadie Newton and Michael Personius, serve as team assistant and team captain, respectively, providing leadership and accountability to their teammates as well as performing at high levels themselves.

Childress also has high expectations for senior red belt Tykeyah Henderson, who is recovering from late-summer knee surgery, senior green belt Isaiah Handog, and sophomore red belts Will Parker and Thomas Siff, who are both working extremely hard in practice.

Liberty, for the first time, also has a few incoming freshmen who have achieved black-belt status, including Clint Stinchcomb.

"With such a large freshman class, it's hard to tell because most of them have never competed, but everyone looks very good," Childress said. "I'm really confident they'll perform well, including underbelt Tyler Creasy. She's a very aggressive fighter. It's going to be fun to watch her fight."

Two Liberty freshmen, Jieon Kim and Samuel Lim, are from South Korea, which is where the sport originated.

"From being raised in that environment, their whole way of training in tae kwon do, and the intensity in how they attack people, is totally different," Childress said. "Samuel's not acknowledged as a team leader, but when we're working out, people are watching him because he shows you maximum effort all of the time. He's loud and that keeps people motivated."

Two other black belts pursuing their studies through Liberty's online programs are juniors Matthew Gallagher and Jonathan Healy, who won a gold medal at the Costa Rica Open in late August.

Saturday's competition is expected to run from 8 a.m. until well after 8 p.m., as it will feature 400 or more contestants from 26 ECTC teams. Those will include Ivy League schools Brown, Cornell, Harvard, and Yale as well as Michigan, MIT, Rice, and West Point and Liberty's Atlantic Coast Alliance of Taekwondo (ACAT) rivals Duke and Rutgers, which has a team of 75 competitors.

The tournament format requires schools to enter three team members into groups divided by belts represented by one lightweight, one middleweight, and one heavyweight. Two of the three members must win their matches in order to advance through the tournament rounds.

"It makes it more of an overall team event, not just an individual competition, and it keeps individuals pulling for their teammates to win," Childress said.

For the first year, the Flames and Lady Flames have been cross-training in the discipline of poomsae, tae kwon do's forms competition, and Childress plans to enter as many as 10 in Saturday's tournament.

"There is a league championship in that as well as in fighting," Childress said. "Athletes perform a set pattern of movements and are judged by their proficiency and accuracy of the movement."

Liberty will compete as a team in one of the two remaining ECTC events this semester, Nov. 4 at Cornell, after traveling to the University of North Carolina for its first ACAT tournament Oct. 29 in Chapel Hill, N.C. The Flames may have an opportunity to host the ACAT event in the spring semester.